30/03/2018, Whilst everyone else was enjoying a nice Easter lay-in and some eggs (of the chocolate variety) for breakfast, I was gearing up to climb Mount Snowdon!

I know right, who am I? Tough Mudder last year (2017) Snowdon this year, Everest next year, I mean who knows?. Okay I won’t be climbing Everest really, but you get what I’m saying right?!

This all come about for Luke’s birthday, both my family and his packed up our cars and headed to beautiful North Wales, for a long weekend. Luke is the big adventurer with 11 Tough Mudders and 2 Spartans already under his belt and the 2018 London Marathon this year I knew he would love nothing more than tackling Snowdon. I had thought about it since his birthday last year, and finally put the plan into action at the beginning of this year. Plus it was something I could do with him, that didn’t involve running and mud, it was going to be a lot easier than Tough Mudder.

I didn’t do any research on Snowdon beforehand, I knew it was a popular destination and that it was usually pretty busy with hikers, so for that reason I really wasn’t too bothered about doing it.

After just over 3 hours sleep I was up at 6 am (on good Friday) dressed in my appropriate attire- Waterproof trousers with workout tight leggings underneath, Sports bra, running top, waterproof socks, walking boots and waterproof/windproof jacket. I took gloves and had purchased a winter thermal headband/ear warmer from eBay at a cost of £1.99. Luke had also purchased some crampons for us all, don’t know what they are? I didn’t either. So imagine my look of horror when after 5 hours on the road and arriving late at the farm house we were staying in, getting ready to fall into bed at around 2am Luke pulls these bad boys out of his bag and just kind of grins at me 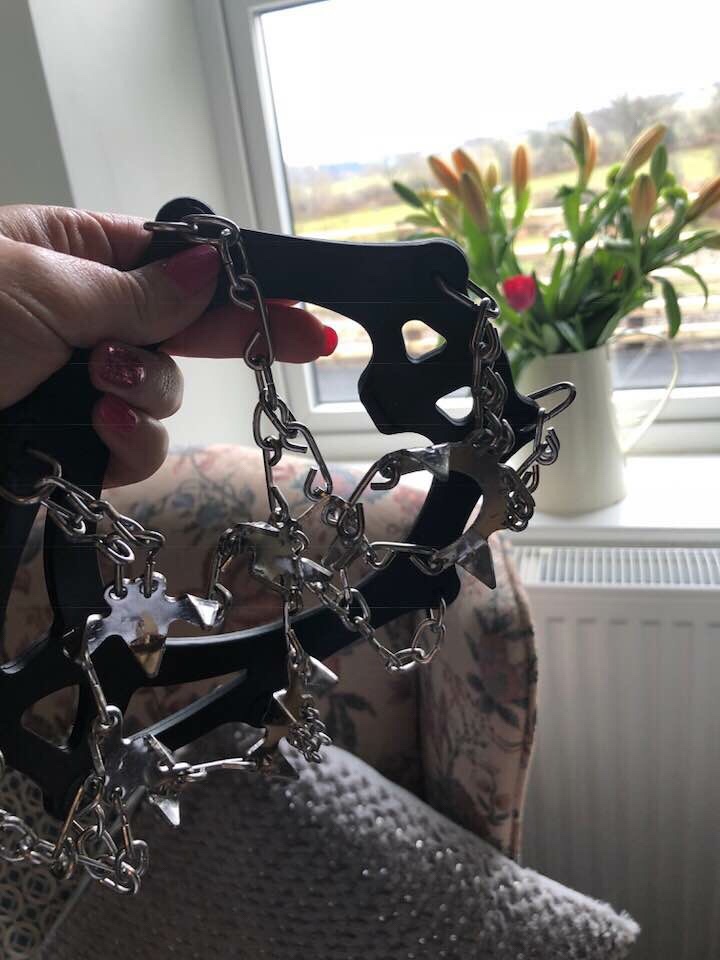 I swear I thought he had gone all 50 shades on me, but bless him, these are actually crampons! and I don’t suggest you climb Snowdon without them! Now with the crampons in the backpack I am ready to go and  I completely looked the part, I was definitely the girl with all the gear and NO idea.

Although we were staying in the Snowdonia national park Mount Snowdon its self was still an hours drive away from our farm house. We left at 7am to get in an early climb as we had heard previously that it gets pretty busy up there, and with a possible 6 hour trek we wanted to start early.

Getting there early means you can get a space in the Pen-Y-Pass car park which is £10 for the day. At this car park you can access the PYG track and the Miner’s track up to the summit. NOTE-Even at 8am when we arrived there were very few spaces left. There is a cafe and the YHA (Youth hostel) where we had a quick cheap but satisfying breakfast to set us up for our hike.

We started the climb at 08.45am, within the first 3 minutes I had inhaled a fly and choked, I’m not even joking, it was all fun and games and then it flew into my mouth, and I swallowed it (not that this information is relevant, I just thought i’d share it with you anyway!) 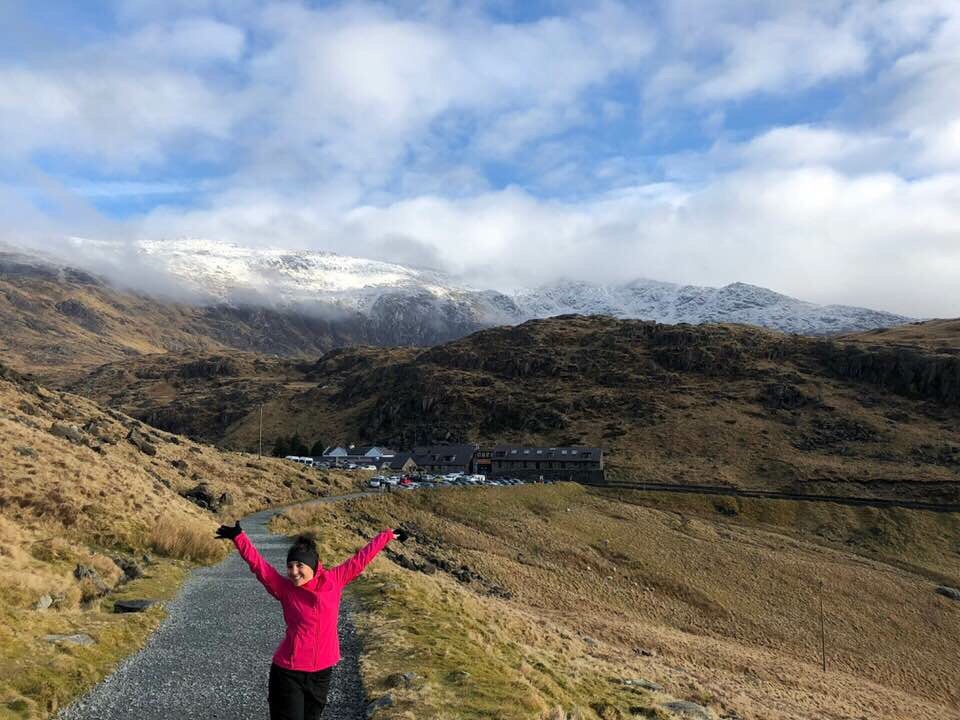 The beginning of the trek started out just fine, it was fun, the scenery was stunning and I was really enjoying being out in the fresh air. I didn’t even need my jacket (I did the cool thing and tied my jacket round my waste!-zero chill, that’s me!) It was quite mild, although I did have a long sleeved top on, short sleeved would have been a no. 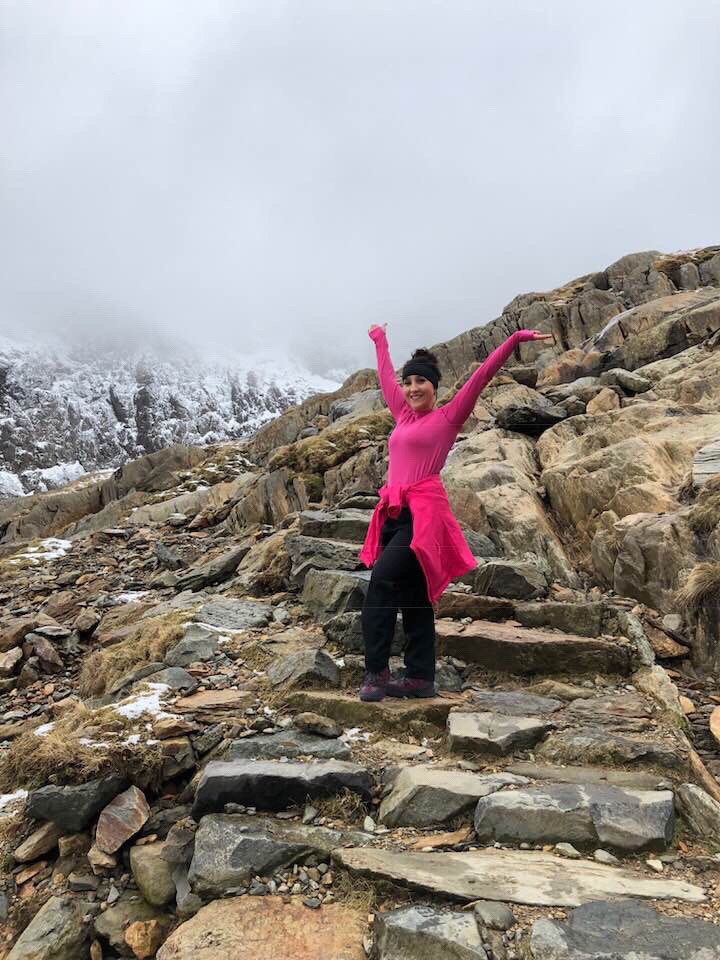 The path although a little unsteady in places was an easy trail to follow, at this point I was really enjoying myself, this was literally a walk in the park! There was plenty of time to take selfies and snap chats, and do a few facebook check-ins too. We then got to a point where the path changed and we wasn’t on the flat anymore but we were gradually climbing, but it’s a mountain and I knew at some point it would get steeper, but that instantly takes it from fun and games to “shit is getting real now”. You could feel the change in temperature the higher up we were going, and we started to see the first tiny signs of snow too! So far I was absolutely loving life! 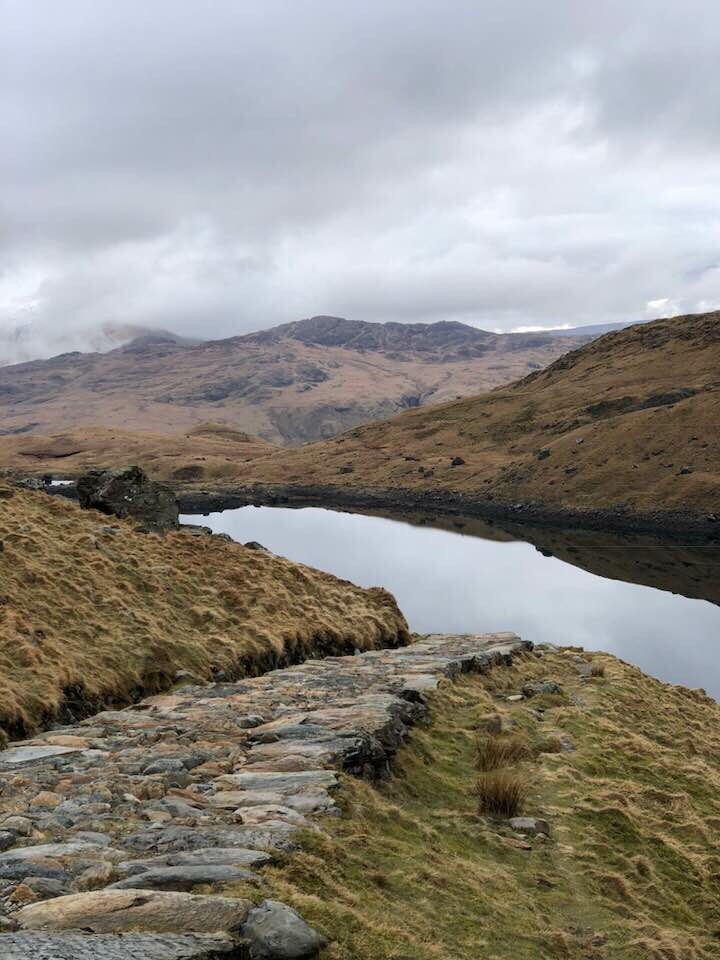 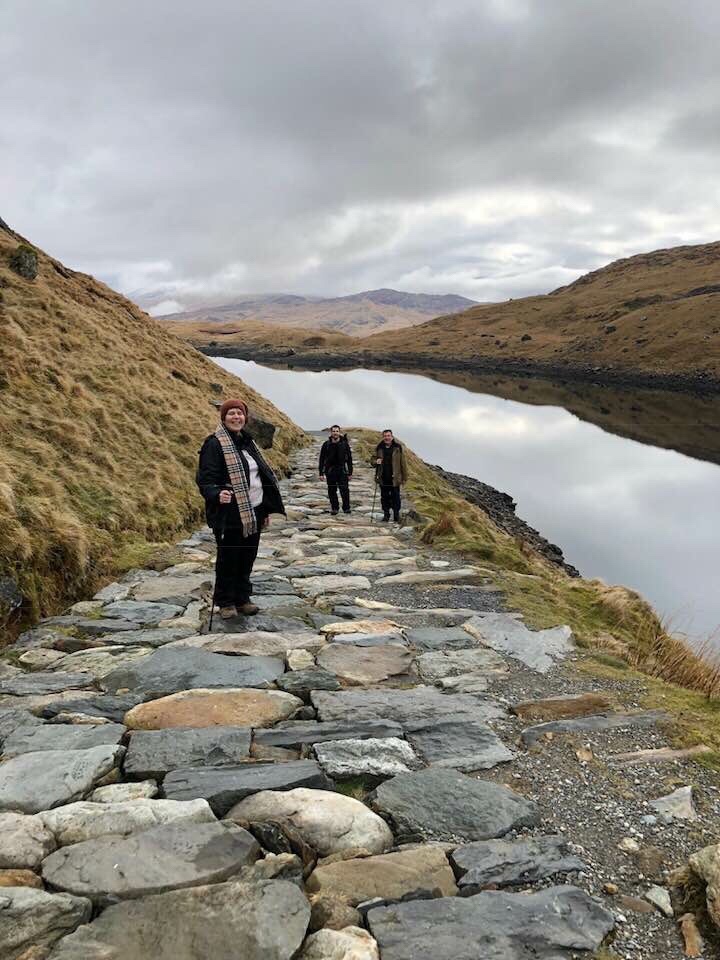 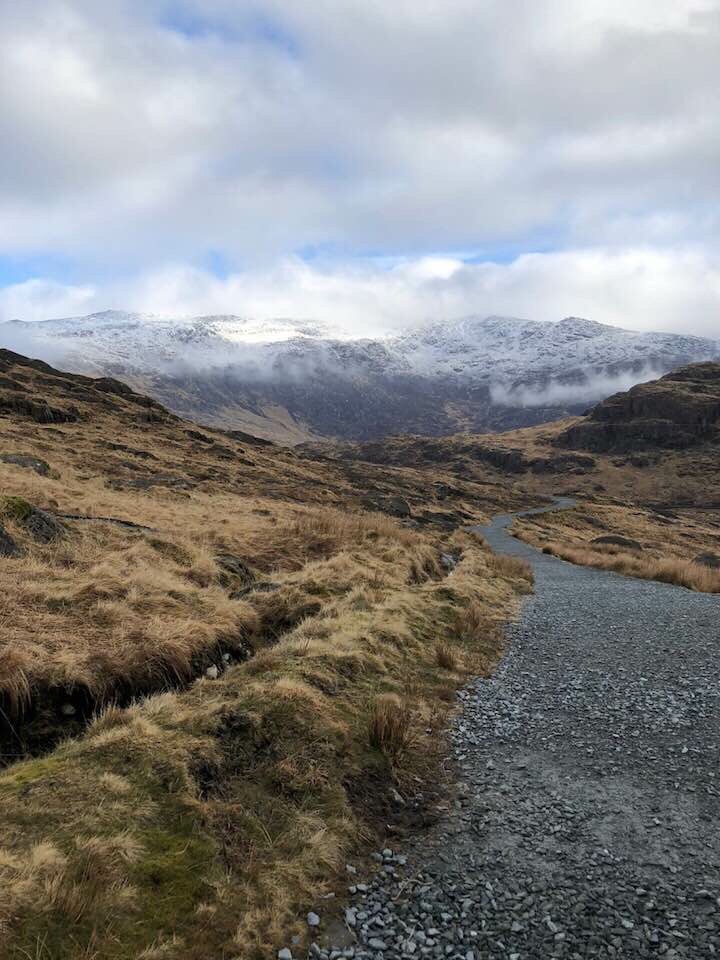 It was pretty tiring as the path was gradually getting steeper and steeper, but I had a good pace and bags of energy, although every corner I rounded I was hoping we might be back on flat ground! Out of no where the safe and sturdy path ended and we were replaced with STEEP steps, not too much of a problem, although a little unexpected, but it’s cool, I still totally had this…..

So here it is, once the climb up the steep steps had ended the path that I was expecting to find was no more! I mean it was literally rocks, and people were CLIMBING! Sorry but I did not sign up for this, this was cliffhanger stuff not a leisurely hike up snowdon! I was completely unprepared for this, and it took me by surprise! Clearly I didn’t do my research before hand!! Epic fail!…. 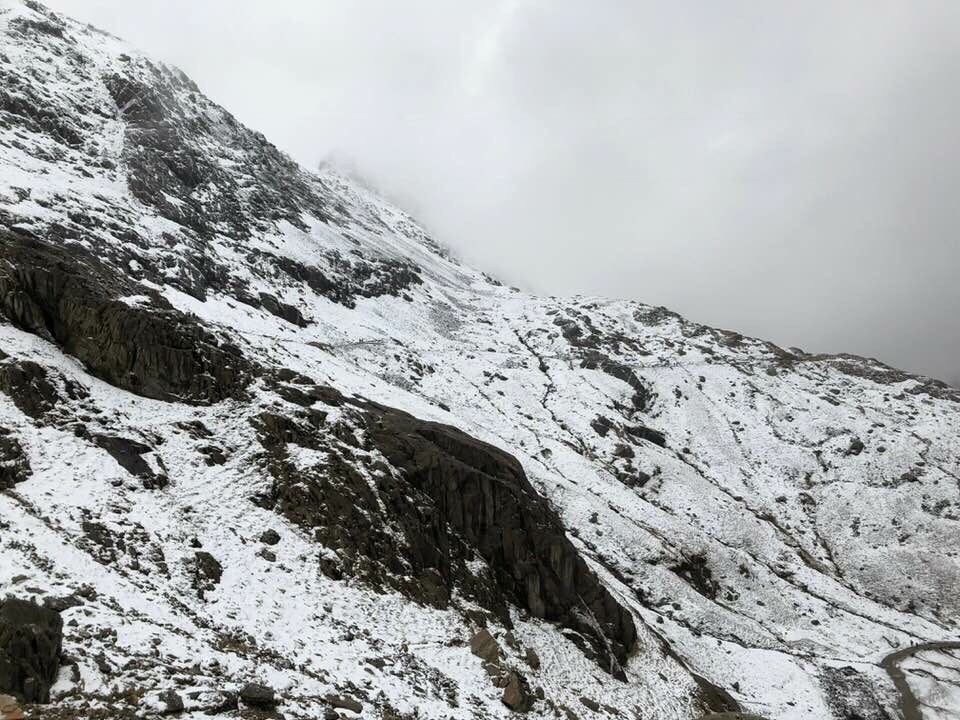 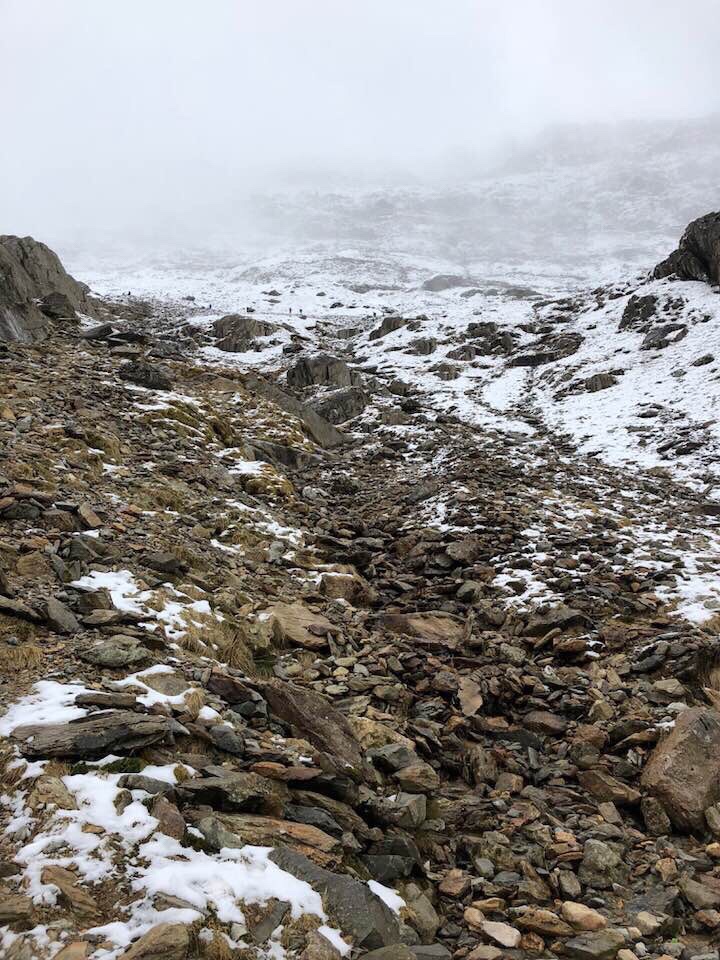 From here on the whole thing took a different turn and it was no longer fun and games but a fight for survival (completely over exaggerating there) but it did get far more dangerous than I had ever anticipated. In fact researching mount Snowdon later that night safely back by the log fire of the farm house, I was sad to learn that someone had fallen to their death back in February of this year (2018) Had I have known this before hand I wouldn’t have done the climb I the first place.

Maybe I am naive but never in my wildest dreams did I think I would in a nutshell pretty much be rock climbing! EVER!!

The higher we climbed the colder it got, the thicker the snow was, the more difficult it became. We saw people slipping, sliding and falling all over the place (thankfully no-one was hurt on this occasion). It got to a point when I really did not want to go any further, climbing higher under these conditions was not something I had planned on and didn’t feel I was cut out to do so. 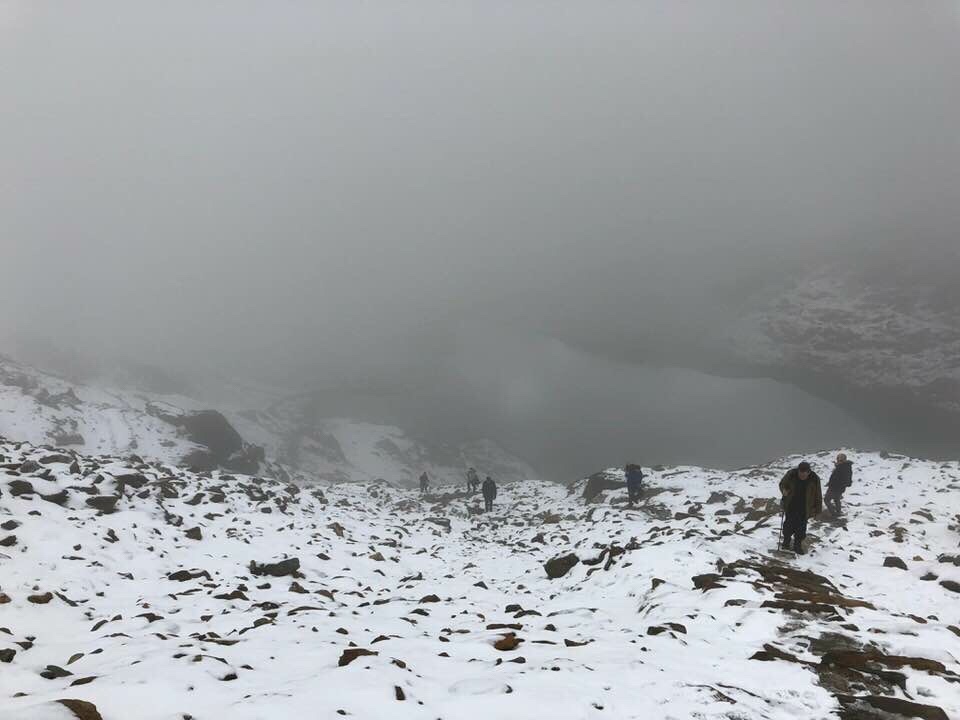 BUT I am a determined girl and with the summit only about an hour away I knew how disappointed I would be if I didn’t make it to the top.

It was at this point that we put on our lifesavers THE CRAMPONS! Seriously how anyone even attempts the remainder of the climb without these is beyond me, these really are the best invention and I instantly noticed a difference. They are designed to dig into the snow and ice to give you a far better grip, and I have to say they did their job. My main advice when using them is TRUST THEM! honestly don’t be afraid to walk on them they will not let you down. As we continued the ascent I had a lot of comments from the one’s who did not make it to the summit telling me I had the right attire to complete the climb. There was no way I was turning back now. 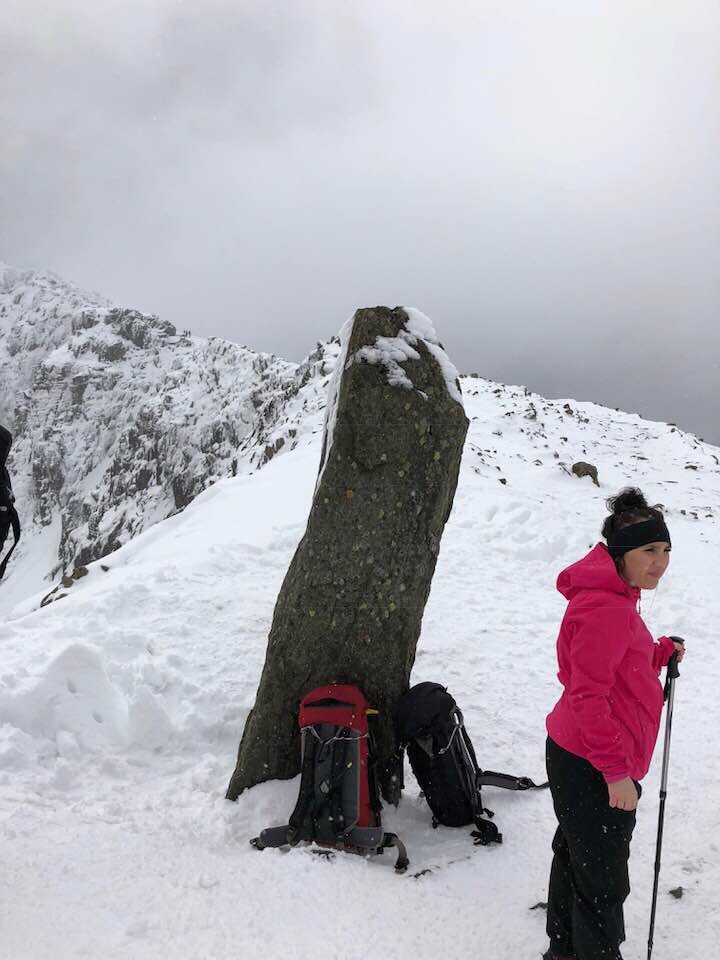 There were a few hairy moments when I almost lost balance, and the further up we got the harder and harder it became.

When I reached the top of the mountain I was excited and happy and I have to say a little emotional, this was all short lived because someone then informed me that actually I had another 15 minutes up before reaching THE SUMMIT!! WHAT!!…. I really thought this was it.

After a brief pause it was clear that none of us were going anywhere until we were at the top, just 15 more minutes to go.

I can only describe being at the summit like being on top of the world, there I was surrounded by cloud and mist way up in the sky, 3,560ft in the air, it was exhilarating, such an amazing experience, an I got do it with my boyfriend, what could be better.

After pictures, selfies and some live streams, it was pretty cold up there and we were keen to start the decent down. Going down I have to say is quite possibly more nerve wrecking than going up!! You have to tread very carefully as there are lots of loose rocks and it was getting very icy coming down too. Yes I stacked it on the way down, one minute I was walking the next I was on my back, luckily the only thing that was bruised was my ego.

There come as point when all I wanted to do was get off the mountain, it was pushing 3pm and I was so over it!! The climb down and walk back to the car seemed to take forever, it was never ending, the wind had picked up and the temperature had got a lot colder, I was pretty miserable towards the end.

Nothing was more welcoming than the site of the carpark, it was around 5pm, we were all cold, tired and hungry, and wanted nothing more than a warm car, a hot shower and food.

This whole experience was AMAZING and looking back on it I LOVED every moment of it. The views are stunning, breathtaking even, and to be 3,560 ft in the air amongst the clouds was an experienced won’t forget.

To climb Mount Snowdon out of summer season you will need crampons (I can’t stress this enough) a pick axe is advisable (but not essential) as we didn’t have one. You will also need Layers of warm waterproof clothing, waterproof gloves and energy bars and water to keep you going. We also had a hiking stick which really helped in tricky areas.

There were elements of the climb that were I’d say quite dangerous and it was made even worse by the ones who try to walk it completely unprepared, if they fall they pose a risk of taking you out with them!! BE CAREFUL

But definitely give it a go!!

One final thing NO ONE tells you and I never expected…… Your fingers will swell to little sausages just like mine did, apparently this is normal, but it was a bit of a shock!! 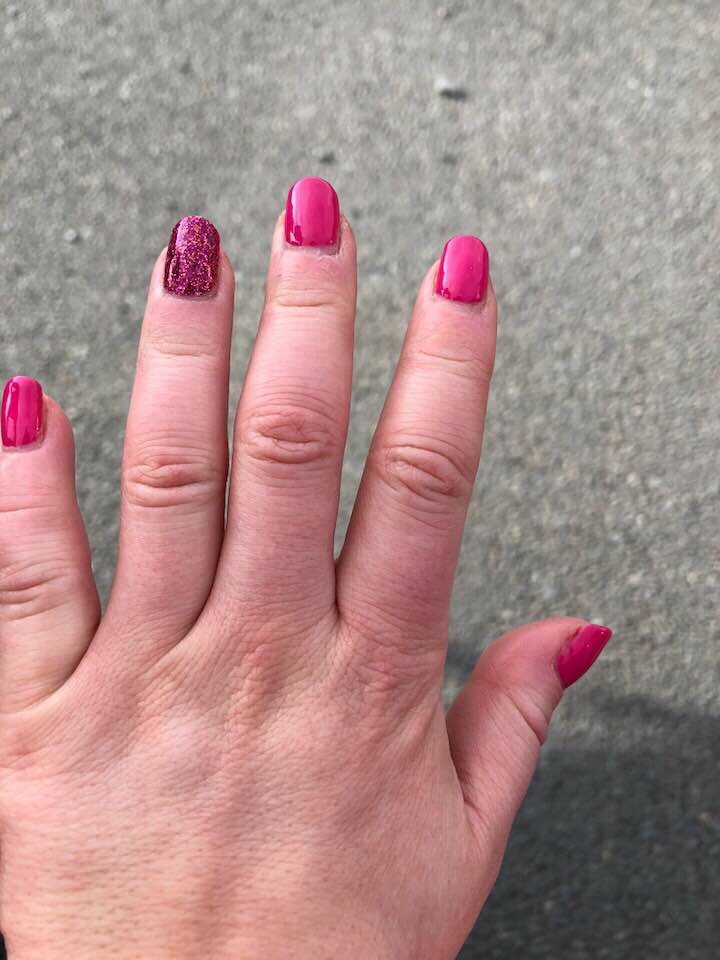