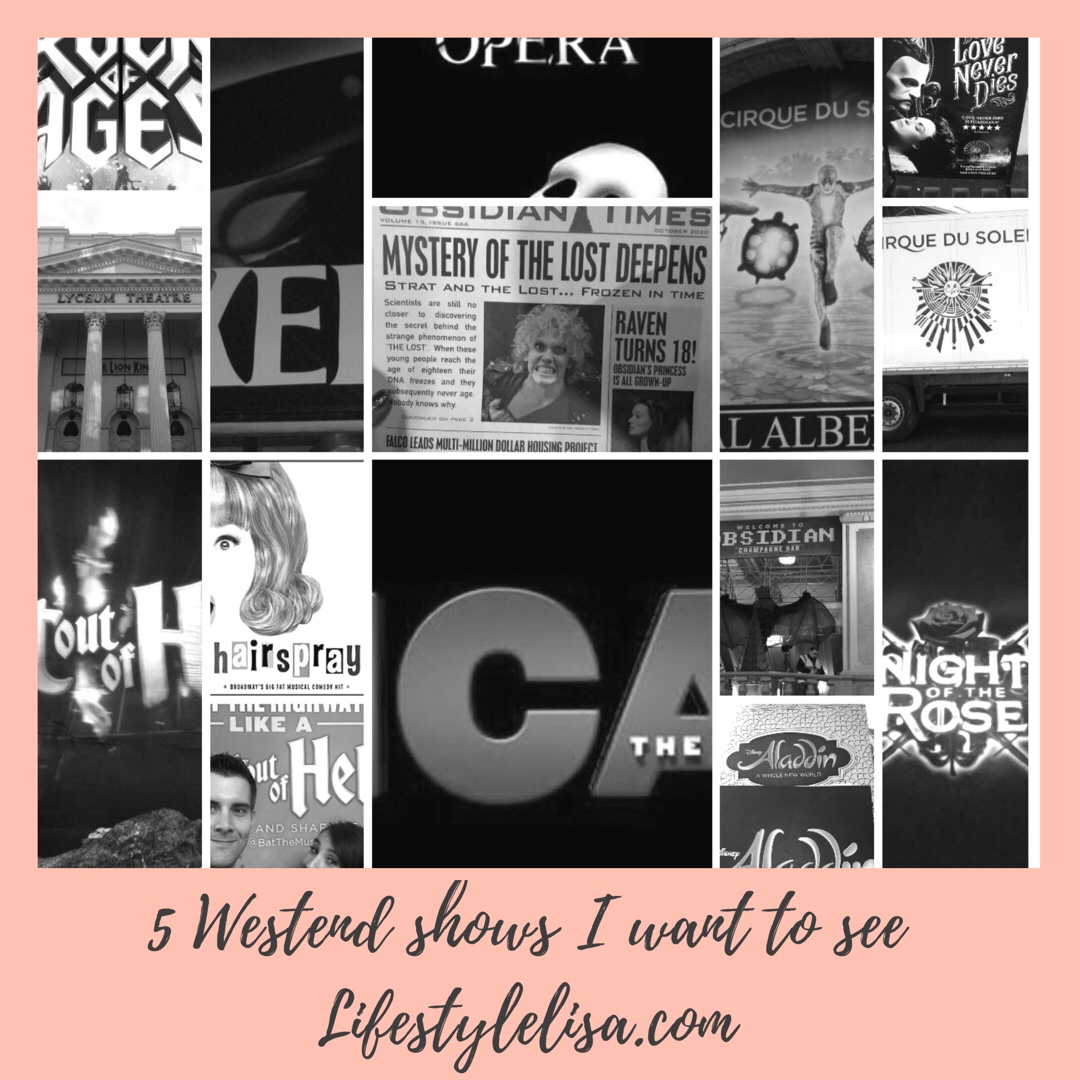 Hi everyone, hope the working week is so far so good, keep going, the weekend is coming!!

What’s better than a Tuesday blog post right, and today I thought I’d do one about West End shows! Now it’s no secret that I love West End shows, and have been lucky enough to see quite a few amazing ones. Most recently of course was Bat Out Of Hell which I saw a total of 5 times, and was desperately hoping to see it one final time on closing night (5th January 2019) except I had no one to go with (actually crying inside!) I couldn’t even persuade my boyfriend Luke to watch it one final time with, (feeling super sad about that). Moving on though (honestly I’m over it…..) I started thinking about what West End shows I’d like to see Moving forward.

The Book of Mormon

This is a good one to start with as I am actually going to see this in March, thanks to my sister and her boyfriend who got Luke and I tickets for Christmas. Winner of nine Tony Awards, The Book of Mormon comes from South Park creators Trey Parker and Matt Stone, so I am pretty sure Luke will like this show! I’ve read the reviews and seen clips of it on YouTube, and I have to say it looks pretty awesome, and very funny, so I’m excited.

Joseph and the Amazing Technicolour Dreamcoat

Originally released as a concept album in 1969, Joseph and the Amazing Technicolor Dreamcoat has become one of the worlds most iconic musicals, featuring songs that have gone on to become pop and musical theatre standards, including Any Dream Will Do and Go Go Go Joseph. The show has been performed hundreds of thousands of times including multiple runs in the West End and on Broadway. Joseph is set to return to the London Palladium from June 2019 for a limited run until around September. I am hoping to get tickets so I can cross it off of the list. The show has only a few lines of spoken dialogue; it’s almost entirely sung-through (something I think Luke will hate) so maybe he’s not my number one option to go with!!

This smash hit Broadway musical is the inspiring true love story of Emilio and Gloria Estefan which charts their journey from Cuba, onto the streets of Miami and finally to international superstardom. The musical features some of the most iconic pop songs of the era, including‘Rhythm is Gonna Get You’, ‘Conga’, ‘Get On Your Feet’, and ‘1-2-3’. My mum was/is a Gloria Estefan fan so this music brings back happy memories of when I was little, listening to my mum playing the songs. Actually I think this is more of show my mum would like, with all the dancing, and I’m pretty sure she’d sing along! This is another show coming to London for a strictly limited season…. I think I need to book!

This seems to be the show that everyone is raving about at the moment, and after seeing a small clip of it on the royal variety performance last year, I think I can see why! Hamilton is the story of America’s founding father Alexander Hamilton who became George Washington’s right-hand man during the Revolutionary War. What I think will certainly set this musical apart is the score, which blends hip-hop, jazz, blues, rap, R&B and Broadway, it really does sound amazing!!

The woman in black

Although not a musical it’s still a London stage play, and one that I am desperate to see! I love the film the woman in black and I have read the best reviews about the stage show. It is notable for only having two actors perform the whole play and is described as a gripping theatrical exploration of terror with a blend of suspense, drama and bold stagecraft! It opened in London’s Westend back in 1989 and is still running today which makes it the second longest non-musical play in Westend history! It’s a show surely not to be missed!!

West End shows come and go, and I am hopefully going to try and make my through as many as I can! Shows that I can tick off of the list are

And of course most recently and by far my favourite show Bat Out Of Hell, which I have seen 5 times! Once in 2017 and four times in 2018! Sadly it has now ended it’s run at London’s dominion theatre, and I wasn’t in the audience to witness the final show, something I genuinely think I will forever be sad about

Although my favourite and arguably the best ever musical has ended, I am certainly looking forward to seeing some more great shows, even if they won’t live up to Bat. And with the closing of Bat, 42nd street, dream girls and Chicago this month I am looking forward to 4 more brand new shows hitting London’s West End, whatever they may be.

Please do let me know what your favourite musical’s are? Are there any that should be on my list? Leave me a comment below