A Rainy Day at Animal Kingdom 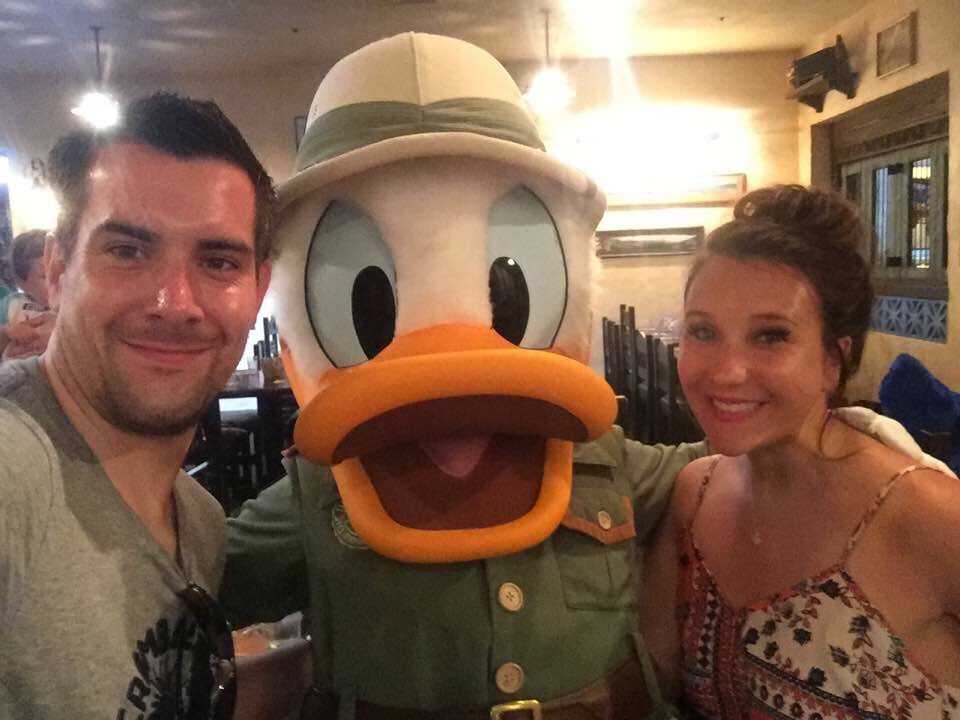 Today was yet another nice and early start for us, we were up at 6am out of the room by 7am and at our early Tusker House character dinning reservation at Animal Kingdom by 8am!!

Let me start by saying I LOVE ANIMAL KINGDOM! it is a great park, and has a really great vibe and atmosphere about it check out my 2016 blog ??https://lifestylelisa.com/2017/02/01/animal-kingdom-my-disney-adventures/

Luke and I had never eaten at Tusker House so we were both pretty excited, not to mention hungry about trying it out.

You will find Tusker house located in the Harambe market place, it is an all you can eat buffet and it’s here that you get to Dine with Donald Duck, Daisy Duck, Mickey Mouse and Goofy and will cost you $30 per person.

We checked in at the front reservation desk inside the park and were seated pretty quickly by a friendly server, who took our drink orders, explained the layout of the buffet and told us when the characters would be coming out. I love nothing more than a buffet, and here at Tusker House they had loads of different foods, including the usual, egg’s, waffles, pancakes, pastries, bacon etc, they also had curry and rice and salad and everything I love to eat!! So yes at 8am I was eating vegetable curry and rice!!, I love sampling different foods from around the globe and the African food I have to say was delicious!! I could have easily have eaten a lot more than I did!! We drank jungle juice, as well as our coffee’s and had pictures with Donald and CO. I have to say this along with Garden grill this is one of my favourite and most recommended dinning experiences. The staff and food and service were all great, and I love meeting the characters, which seeing as it was just myself and Luke did not feel at all awkward. The inside of Tusker house, was very well themed in with the African vibe and of course all cast members were dressed accordingly.

Once we left breakfast we headed straight for Kilimanjaro Safari, I have heard that the best time of day to see the animals is either early in the morning or later at night, because it’s cooler they are far more active. Well I tried and tested this theory and I can confirm that this is TRUE!! The animals were very active, and I had rhino’s walking so close to me, I could almost touch them!! It was a wonderful experience and I couldn’t believe how many of the animals I saw, compared with previous years, when they were not as active, because we did the safari tour midday.

I find being at Animal Kingdom a lot more chilled out than other parks, I like watching the street performers, and the bands, and I just love the real African vibe!

Of course one of my most favourite shows throughout Disney is The Festival of the Lion King which is a live staged musical and takes place daily at Animal Kingdom (Check your park guide for times). This really is a MUST SEE while you are visiting the park, it’s energetic, features all of your favourite Lion King songs and really is beautiful to watch. I always get emotional during can you feel the love tonight!! Make sure you get to the theatre early to get a good seat I always use a Fastpass for this.

As well as the amazing Festival of The Lion king, Animal Kingdom has some pretty awesome rides too! We managed Kilamanjaro Safari, Tough to be a bug, Kali River Rapids, Expedition Everest (twice) and Dinosaur. We also did Flights of Wonder, visited the affection section, and the conservation station too.

Animal Kingdom is a very busy park due to the opening of their newest land Pandora-The world of Avatar. Now if you didn’t know this is a themed area based on the characters from the film Avatar. It opened at Animal Kingdom on the 27th of May 2017. The World of Avatar includes two major attractions, Flight Of Passage and Na’vi River Journey as well as retail and dining outlets.

Of course the ride of the moment is Flight Of Passage (FOP), this ride will have up to a 3 hour wait time if you are not lucky enough to get a Fastpass. As luck would have it Luke was super hot on selecting our FP’S for the holiday and HE DID get us a FP for FOP. I have to say I wasn’t bothered either way if I did or didn’t do this ride, I am not a fan of avatar I have only ever seen the film once (and was bored) so I don’t really know about banchees and the world of Pandora, so I didn’t think I would like this ride. I love ‘Soarin’ the ride so I had reservations on how much I would enjoy FOP, in fact as in was walking up to the ride I even asked a cast member how could they thought this ride was, to which he told it was the BEST RIDE out of all the park……Well I’ll be the judge of that!

I HATE giving anything away, and I certainly do not want to spoil this ride for you, all I can say is…… WOW!!!! in fact that’s pretty much all Luke and I said to each other for a good hour after the ride. I don’t have the words for it, it was Disney at it’s best! It was unbelievable and breathtaking and I felt emotional. I promise you I forgot, it was a ride, everything was so real! And this is coming from a girl who hated the Avatar film! It really is the best ride throughout Disney! I’m in awe of it!! I would say if you can’t get a FP for it, I would personally queue for up to 2 hours just to get to ride it! We never got to do the Na’vi river journey although I have heard that it’s definitely not as good as FOP, and it’s quite a short ride too. So without a doubt get the FP for Flight Of Passage!

Unfortunately a while after we got off this ride, the sky’s opened up and we had the worst rain! not even our ponchos were doing the trick! We did stick it out for as long as possible as I really wanted to see the river of lights later on that evening, but it got too much and we got too cold, so we had to call it quits and ended up leaving around 6.30pm.

We had a fab day, and enjoyed every second of it, rain or shine, we still managed at decent 6,77 miles and 17,031 steps! Having an early finish did mean we were able to grab a Golden Corral take out and head back the hotel to do some washing, the end of our vacation was drawing ever closer (Sad Face)