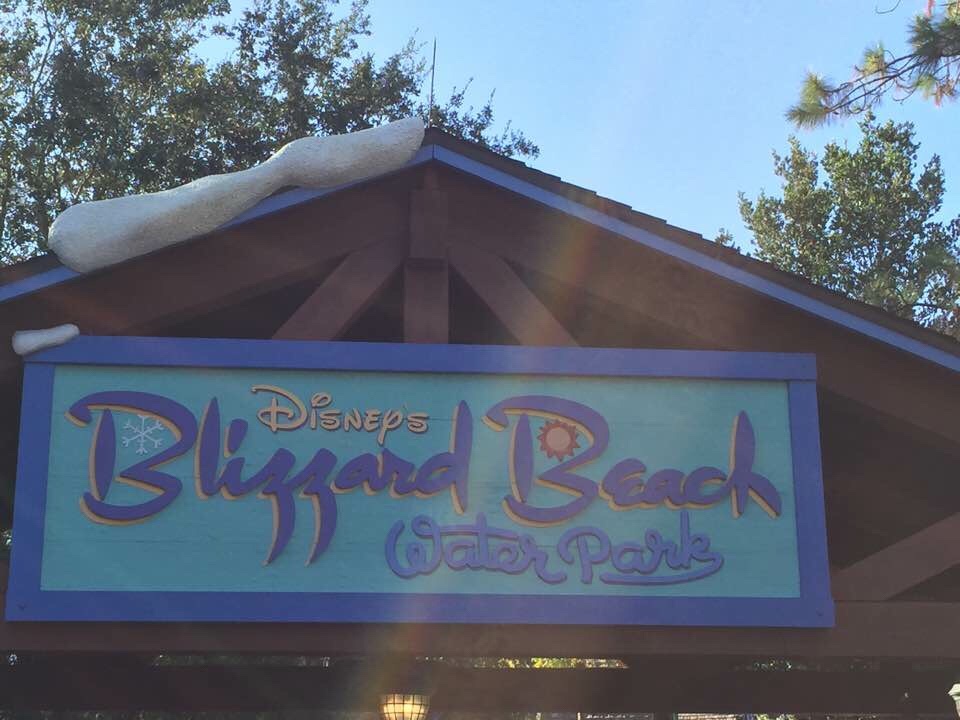 Today we actually had a LAY IN! Albeit a very small lay in, it was still very very much appreciated.

We were off to Blizzard beach for a day of water slides and wave pools, not to mention a chill out in the cabana, something I was very much looking forward too!

I haven’t been to Blizzard Beach since my visit in 1997! Out of this park and Typhoon lagoon my family and I always preferred Typhoon lagoon so always missed out Blizzard beach. Luke however was very keen to visit as he had never been, so we decided to add it in on our 2017 trip.

So first up here is the back story

According to Disney “legend,” a freak snowstorm in the area led to the development of Florida’s first ski resort. Naturally, the snow did not last long. This left behind a collection of waterlogged yet snow-less ski jumps and chair lifts. The operators were preparing to cut their losses and walk away. However, they were interrupted by an echoing “YAHHOOO!!!” coming from the mountain of melting snow. They looked up to see a blue alligator, wearing a red scarf and gold innertube, coming down the mountain at top speed. Ice Gator, the mascot, then landed in a pool of melted snow at the base of the mountain with a thunderous splash. The ski resort operators suddenly saw the park’s potential, and the mountain of snow became Blizzard Beach, “the most slushy, slippery, exhilarating water park anywhere!”

The park is split up into different sections

Green Slope – The Green Slope attractions (all are single track water slides. They can be accessed by foot, or by chairlift. The chairlift is a one-way ride, except for guests with disabilities.

Slush Gusher – is a 90-foot-tall, 250-foot-long snow-banked mountain gully body slide attraction that reaches speeds up to 35 miles per hour.

Downhill Double Dipper – is one of the world’s only side-by-side racing tube slides.

Snow Stormers – is a “mat slide” consisting of three flumes that are 350 feet long.

And then time to relax!

Cross Country Creek – is a 3,000-foot (914 m) slow-moving water attraction commonly known as a “lazy river,” that travels around the perimeter of the water park.

Now back to the blog!

We arrived at about 9.30am (park opens at 10am), and just like Typhoon Lagoon, Blizzard beach will let you in earlier than other park guests if you have a Cabanna booked (priced at around $200).

Blizzard Beach is absolutely no different to the Typhoon Lagoon cabanna and for the same cost you get everything included that you get at Typhoon Lagoon (bottled water, chairs, locker, towels and a cast member server to take your orders, and bring your food back)

The service we received when we first walked in was a bit hit and miss, the cast members seemed to have a little argument over who was going to take us to the cabana, but they sorted it in the end and we quickly got shown to our cabana and settled in.

We were right in front of the ski lift, and decided that since we were, we would use this first and get some of the bigger rides done.

I have to say I don’t like this park at all, firstly I don’t think the rides are as good, I don’t think there are as many rides here unlike Typhoon Lagoon, and there doesn’t seem to be many rides for just two of you, so you either have to wait and join a larger group or miss the ride out altogether!!

I did all the rides once (with the exception of Summit Plummit) and then spent the rest of the day chilling out in the Cabanna.  Luke was brave enough to launch himself down the most insane water slide I have ever seen, and he LOVED IT! I think he actually did it twice!

If it was up to me this park will be left off of my itinerary from now on, I just didn’t enjoy it as much as Typhoon Lagoon and didn’t feel it had as much to offer. Luke on the other really enjoyed and I think he would definitely at some point like to go back.

It was here I lost my Magic Band, I’m still sad about it now…. My pink Magic Band with my name on it, it was a sad day!!

Once we had finished at Blizzard Beach we decided to head back to the hotel for a quick change before heading BACK to Magic Kingdom to finally watch in all it’s glory Happily Ever After!! I can now finally with confidence say that is is SO much better than wishes! We got ourselves a great view spot 2 hours before the spectacular was due to start. There was no way I was missing it, and I wasn’t prepared to move at all, not even to get a drink!! The 2 hour was more than worth it, and I was happy to watch and have a great view of the castle and the wonderful Happily Ever After.

We ended the night with room service, and fell asleep after that, these busy day’s are taking it’s toll!!