Not the week I had planned!(my tough mudder journey) 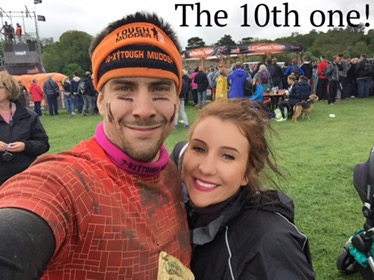 Well here we are week number 7 of my tough mudder training/journey. Because I am just so honest, I will tell you that this week has been exceptionally bad! As in it got to Wednesday and I hadn’t done a single run…. Basically I woke up Monday with a cold, streaming eyes, runny nose, ear ache, soar throat, the full works! So I admit I have been feeling quite sorry for myself. So seeing as I haven’t done much in the way of excercise I thought I’d take time out and take this opportunity to just build a little picture of myself.

Okay so to probably many signing up for a tough mudder isn’t that big of a deal, but for me it quite possibly is the biggest challenge of my life so far. I’ve never been into fitness despite spending 7 years working as a sales advisor for a leisure centre. As a younger girl I took dance, gym, drama and trampolineing classes and as I have previously mentioned I also have grades in ice skating, so it’s fair to say that I have always been active, just not in the let’s work out or hit the gym kind of way!  I had never even heard of a tough mudder until I met Luke back in September 2013, after chatting for a while whilst on a night out he started to tell me about how he did these tough mudders and explained what they were. I remember thinking how crazy he was to do them and how it all sounded like my worst nightmare. Up until I met Luke I didn’t even own a waterproof coat, so I really never pictured myself standing knee deep in mud whilst Luke took part in tough mudders and spartans!

But that’s exactly what I do now, at least 3 times a year maybe 4 I will most definitely be in a muddy field somewhere in the Uk in my wellies (I might add) watching my boyfriend take on the tough mudder course (which he has done,10 times)

I love watching him, but I never EVER fancied doing one myself!….But here I am training for my first one, in just 6 months time! Crazy to think that once upon a time I used to spend my weekends out with my best girls drinking and dancing the night away……

Back when my biggest concern was what shade of lipstick to wear!

Friday night in the gym, just the norm!

Running is my absolute bug bare and 7 weeks on I HATE it just as much as I did on week 1, and I find it the most difficult thing in the world to do! (Slight exaggeration) but you get my drift! I am desperate to complete the course because it will be a massive achievement for me and I know Luke will be so proud, not to mention very impressed! As well as myself and Luke also tackling the august course will be Teresa (Luke’s mum) a fellow first time tough mudder herself, and Charlotte (Luke’s sister) who like Luke is a bit of a pro after already completing 4 of them! But this is her first  one back after having her beautiful little girl Amelia in 2016. Although she has said that she is struggling at the moment with training (which I find refreshing seeing as she is pretty fit) I know that by the time august comes around she’ll definitely be back on track!! And I will still be struggling!?

Me with the crazy pair!!?

So there you have it! A little insight into the girl I used to be to the girl I am now! Complete with a waterproof coat, and a selection of gym attire! I guess make up is a big no no for a tough mudder…. wow I definitely did not think this through properly!

Right back to week 7! (I just needed a diversion from the fact that I have done so poor this week!) So Monday and Thursday was all about the clubbercise, loved both of the classes and worked my butt off! And both instructures this week decided to throw in a whole routine dedicated to SQUATS!! OMG, let’s put those up there with running! I hate squats!!! And squats hate me!!! I’m pretty sure that my calorie burn would have been good for these two classes but my Fitbit has had some kind of breakdown and has decided not to sync! Seriously I am on my 3rd Fitbit since august 2015! they keep on breaking!, anyone else had this problem?

So finally it’s Friday! The weekend is nearly here,  but before I can go off and enjoy it I have decided that tonight I am going to do the 20 non stop minute run! I know I am going to struggle, and I do still have a cold but because I haven’t run once this week I kind of owe it to myself to get out there and just go for it. I’ve done a seperate play list on my phone simply titled ‘the 20 minute run list’ and was more than happy to discover that 20 minutes is just 6 songs! Totally doable (I think/hope). I have decided that I will stay on the 20 minute run until I can get through it at a  comfortable pace, so maybe a week or 2 then I will move on.

Luke gets home just after 7 which is great as we can get out there and get the run over and done with, I was still feeling pretty confident at this time too which is a good sign.

Well that 20 minute run didn’t go to plan! And I’m feeling really annoyed! When we got to the playing field at around 7.20 Friday night I found it was occupied by 2 groups of weed smoking kids! Okay not great but not really causing me any trouble. So off I went doing my little warm up walk. When it come to the big 20 minute run I joined Luke who was on his 2nd loop of the field, I thought running with him would encourage me and give me extra motivation actually being with someone. Unfortunately it was at this point that the 2 groups of weed smoking teens decided to pipe up everytime we run past them, they would whistle and make crappy commments like ‘118 got your number’ I mean FYI no one even says that anymore! Unless your a looser on a Friday night sitting on a kids swing smoking! It really started to annoy me and I decided that I didn’t fancy running around a dark field anymore. Luke was great and told me to ignore them, but I had already had enough. Luke then suggested moving away from the field and onto the pavement along the main road. Unfortunately the pavement is really uneven, it was dark and Luke was ahead of me with his head torch on (which he did offer me but I declined) next thing I know I tripped on some un even floor and went flying (okay not exactly flying, but I tripped, and almost fell) so of course I had a mini meltdown (naturally) and decided that was it, I was done and heading home! Luke persuaded me to do one more lap of the field, which I reluctantly agreed to, and although I tried to put my all into it it was a very halfhearted run back to the car. As we passed the weed smoking teens again on our way to the car, one of them shouted out ‘you run like the 80’s’ seriously what on earth!, who even says that, and what does it mean, how do the 80’s run?….. unless it’s like street talk and I’m not down with it!….maybe I’m just not hip! (? crying with laughter). On a serious note I felt majorly deflated after that disastrous run, it’s most definitely my worst to date, I was so motivated to do it all Friday and it was ruined by a bunch of idiots!

Well hopefully next week will be better, I’m not going to ponder on it and I won’t be beaten! My bags are packed, I’m off to Luke’s for a chilled weekend.

Hope you all have a great weekend