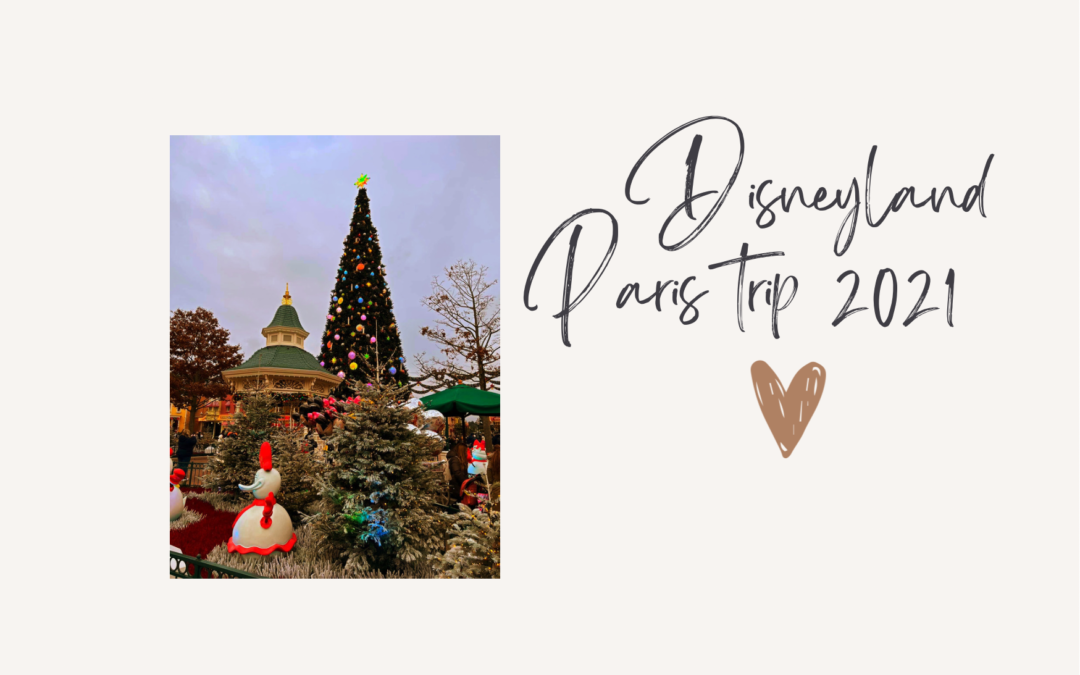 My trip to Disneyland Paris seems like years ago now, even though it has only been just over 2 months (okay nearer 3 months) but so much has happened since returning, which is why this post is ridiculously late.

I actually vlogged my entire trip which I have only just got round to editing – they are now on my YouTube channel. I’ll leave the link at the end of this post, please head over and check them out.

For now though I wanted to do a overall summery of my trip.

For my birthday last August Luke surprised me with a trip. He gave me the choice, I could either go to Walt Disney World Florida or Disneyland Paris. Now covid was still very much dominating every day life at this point so I decided that Disneyland Paris would be a far safer option than trying to get all the way over to America.

I am a huge Disney fan, and have enjoyed so many trips to Walt Disney World but had never been to DLP before, so I was pretty excited to be going somewhere different and ticking off another castle from the list .

As I usually visit Disney World for Halloween I wanted to do something completely new, so booked this trip for December, which meant DLP was going to look super Christmassy and it was going to be so cold, just perfect.

Leaving on the 5th of December we travelled via the Eurostar from st Pancras London, which took us to Lille, we then changed, jumped on another train which to us to the park. I was meant to travel directly to DLP but covid somehow messed up the trains.

There are 2 parks in DLP – Disneyland Park and Walt Disney Studios park. They are in walking distance of each other so perfect for park hopping. In fact park hopping is probably something you WILL do on your trip as there isn’t really enough to do for an entire day in just one park. So get those walking shoes ready – I’m serious, Luke and I were averaging over 23k steps a day!!

Going in December (just before Christmas) I stupidly thought that the parks would be very quiet…. How wrong was I! It was so busy, like manic! And that was both parks! The queues were very long and we ended buying fast passes just to access some rides rather than waiting. Buying fast passes by the way is the new normal now, and has replaced the conventional fast pass system that we have all become accustomed too. Fast pass prices differ depending on the ride, for Tower of terror for example it cost €18 per rider.

Disneyland Paris is a really difficult one for me, because as much as I love Disney, at times it really fell short of feeling like I was in a Disney park at all. The easiest way to describe it is 70% Alton Towers (a UK theme park) mixed with 30% Disney magic. It’s a strange mix I know but there were elements of my trip that just felt so un-Disney and other elements that were very Disney.

I really am so happy I got to finally visit Disneyland Paris, it was quick to get too and some of the rides are far better than WDW. And of course I get to cross off the all important castle (I hope to one day have visit all the Disney parks)

I am certainly in no hurry to return anytime soon, but never say never right? I mean to be honest I’d return just to ride Tower of Terror another 6 times!!

You can watch all my vlogs here