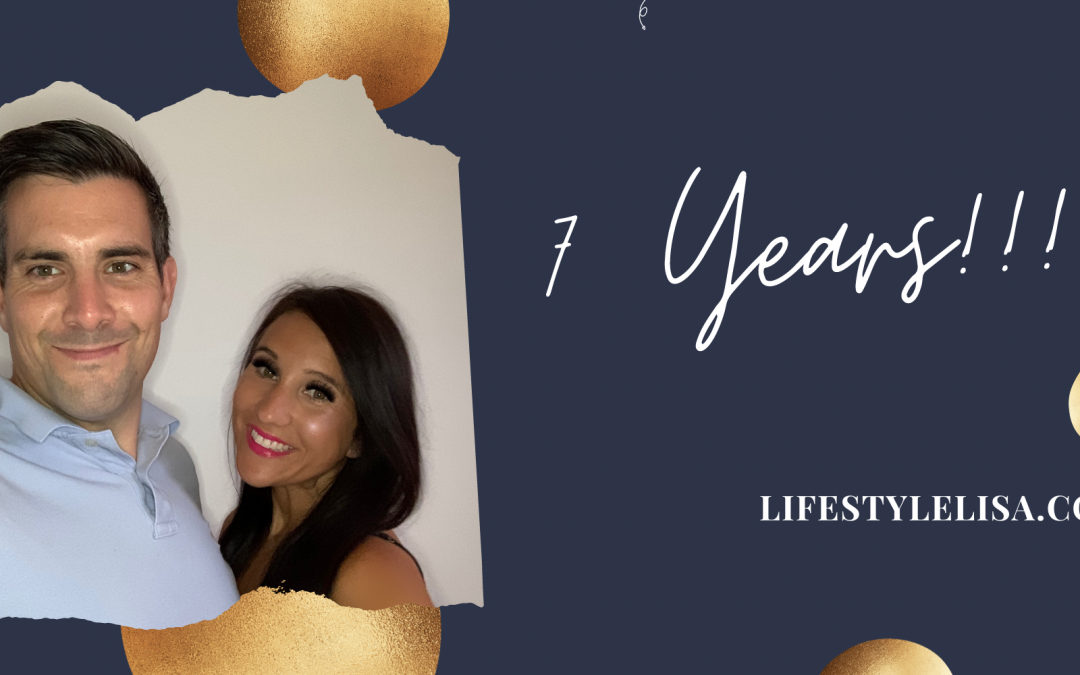 Happy Friday everyone, it’s almost the weekend, and for us here in the UK, it’s a nice 3 day weekend, and who doesn’t enjoy a nice long weekend right!! The late August bank holiday is always special to me as it’s when I first met Luke, on the 30th August 2013!! Which means that Luke and I have known each other for 7 years…….WHAT!!!!!!!

I can’t believe that I met Luke Kendal 7 years ago! It’s been such a special 7 years filled with love and laughter and so many precious memories. I always get lots of comments on our relationship, about how special it is, how we fit so well together, how in love we are, and while YES absolutely all of that is true, the story that got us to where we are now was a SLOW one!!!!

I mean really it should have been a simple boy meets girl, they go on a date and the rest is history right, but this process was just …. well…. loooooooong

The story in a nutshell……

August bank holiday as I’ve mentioned is always a memorable one for myself and Luke (well mainly me as Luke probably forgets!) BUT it’s when I first met Luke 7 years ago.

It was a Saturday night just like any other, out with the girls, not looking for anyone, just content with having a giggle, a drink and a lot of selfie’s. Little did I know that on this night I would meet “the one” I mean honestly NEVER in my wildest dreams did I think that on that particular Saturday night, just like any other, that I would meet my very own soul mate, I questioned if they even existed up until this point in my life.

Whilst I was busy getting ready, pre-drinking with the girls, and taking selfies, 25 minutes away, there was a guy who was also busy getting ready to head out into town with his friend. I suspect that little did he know that he would meet someone that night who he would go on to buy a house with AND a puppy!!

For me the night is as clear as it was 7 years ago, I forget no detail important or otherwise. We were just 2 people who’s paths were destined to cross that night, 2 people who would eventually go on to fall in love.

Was it love at first site? No actually it wasn’t, does that even exist? I mean yes Luke was a good looking guy no denying that, but you can’t love someone you don’t know. After our initial awkward meeting in the local bar, we spent sometime chatting, and honestly we could not have been any different! There was this good looking guy, who was super fit (not only in looks but also in the exercise sense) who did these Spartans and Tough Mudders and ran 5 miles a day. And then there was me, unapologetically girly, hated exercise (that hasn’t changed) hated getting my hair wet in the rain (that hasn’t really changed either) didn’t own a pair of jeans or trousers and would never be seen in a waterproof coat! We were very very different, yet I was interested in him, there was something about him that wasn’t like other guys. He wasn’t cocky, he wasn’t cheesy, he was easy to chat too and more importantly nice!!

Of course a few hours chatting to someone in a local bar did not mean that we were destined to be the next Wills and Kate or Harry and Meghan or that we would even cross paths again. No numbers were exchanged that evening, we simply said goodbye and went on our separate ways. Although I should point out that we did add each other on Facebook!!

And of course I’ve added in the profile pictures of both myself and Luke as they were on that night in 2013 when we added each other that night 7 years ago!

It was me who made the first move actually, none of this nonsense about waiting so many days before you message someone, I mean what is that about anyway!! I woke up  very early the next morning (because I had work) and admittedly was a little disappointed that Luke hadn’t messaged me, but whatever, it was 2013 so I sent a Facebook message, because seriously what the hell, if he didn’t reply, my ego would be bruised for a few days, but I’d get over it, so what did I have to loose. Friendly Hi, message sent, I would be lying if I said I didn’t spend the rest of my working day checking my phone to see if he’d read the message, but hey I’m only human at the end of the day!!

Of course he DID read it and replied later that day, talk about keep me hanging on,  but anyway better late than never!! We exchanged some friendly chat, over the course of the coming weeks we chatted on and off over Facebook messenger. It was the usual friendly chat and to be honest it really wasn’t going anywhere. I wasn’t sure if he liked me, he certainly wasn’t making it clear!

And to quote a line from one of my favourite movies He’s just not that into you “Always be classy. Never be crazy” Which meant that this painful exchange of pleasantries was set to continue!! Because I couldn’t go all crazy and be like “so do you like me”

There was actually even a period where Luke didn’t message me back for a week, and you know a week is kinda like a month when your WAITING for the message! A sure indication that the guy really wasn’t into me! So just give up on him and move on right?! He actually did eventually messaged me when I was at Duxford air show with my dad, which was less than a week before I was due to fly to Ireland for a 4 day trip.

So now to put this into date perspective we are now in MID SEPTEMBER! This exchange of messages had been going on for a while now, I went to Ireland and had a fab time Luke took part in another Tough Mudder and did really well, we were still exchanging messages here and there but nothing more. 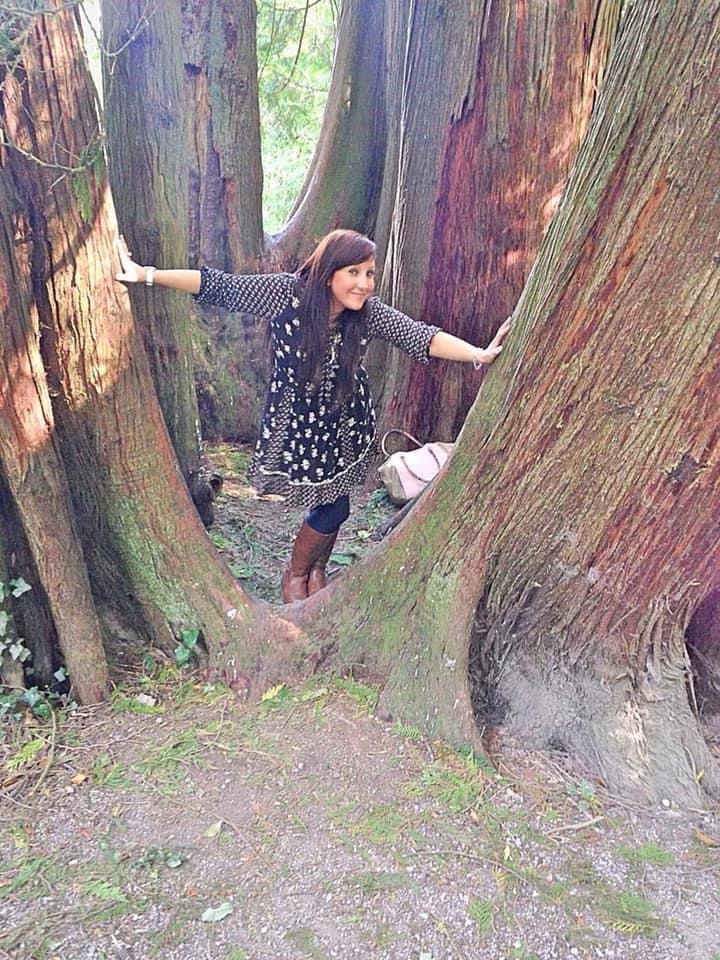 Eventually just when I thought about saying “see ya” Luke actually gave me his mobile number saying that he preferred to text than Facebook message! TRYING not to read too much into this sudden BOLD(ish) move it seemed that all of sudden things may be starting to move in a new direction – well I was definitely down with that!

We started chatting more and more and then hints of a date started to be thrown around between us, although neither of us was man enough to actually ask the other one, so it was all guess work and reading between the lines, and yet MORE wondering and MORE waiting!

FINALLY on October 7th 2013 6 weeks after we first met, Luke and I had our first date! And in case you were wondering it was a cinema trip to see Insidious chapter 2, I had actually seen it 2 weeks before but kept that quiet. Oh and I may have pretended to be a little scared just so I could lean in a bit closer to Luke, which was completely fake of cousre because I am like the scream queen and nothing really scares me, Luke has since realised this to be true! So to be honest after that first date we never really looked back, we enjoyed date night after date night after date night! Eventually meeting each other’s families before finally becoming an official couple on December 28th 2013 then FINALLY saying the L word in January 2014!

The road was kind of long from our first meeting to our first date, to becoming an official couple and finally saying I love you, but we got there in the end and didn’t rush anything, and that’s the most important part for me.

Before I met Luke I remained single for 5 years, I wasn’t going to settle with the first person who showed a bit of interest in me, and I wanted to be absolutely sure that the next person I not only let into my life but also into my family had to be the one, he had to be worth the wait and he had to be special. I was happy being single, it gave me a chance to “find myself” which sounds stupid but I really did discover a different independent me, and even my style changed, I became this whole new person and I loved it, so love really was not the forefront of my mind. And that’s when it unexpectedly happens, as it did for me.

Inserted for fun a small collection of the evolution process, some of the top photos are cringe!!!! 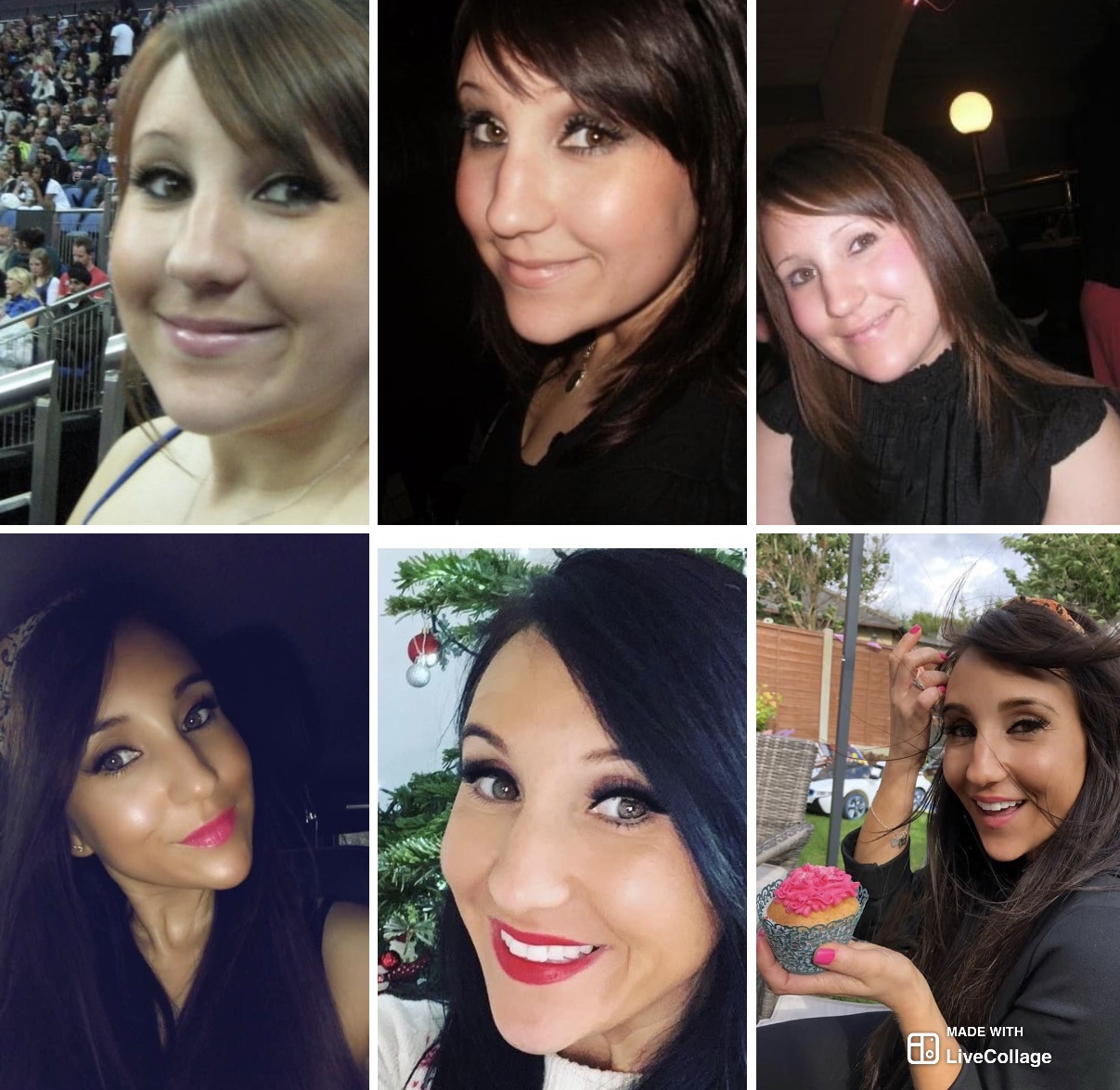 Luke and I have had the most amazing 7 years together, we’ve travelled to new destinations, we’ve done crazy things, we’ve had many adventures, visited new places, stayed in amazing hotels and eaten amazing food, but more than all of that we have laughed a lot, and loved each other a little more every day. 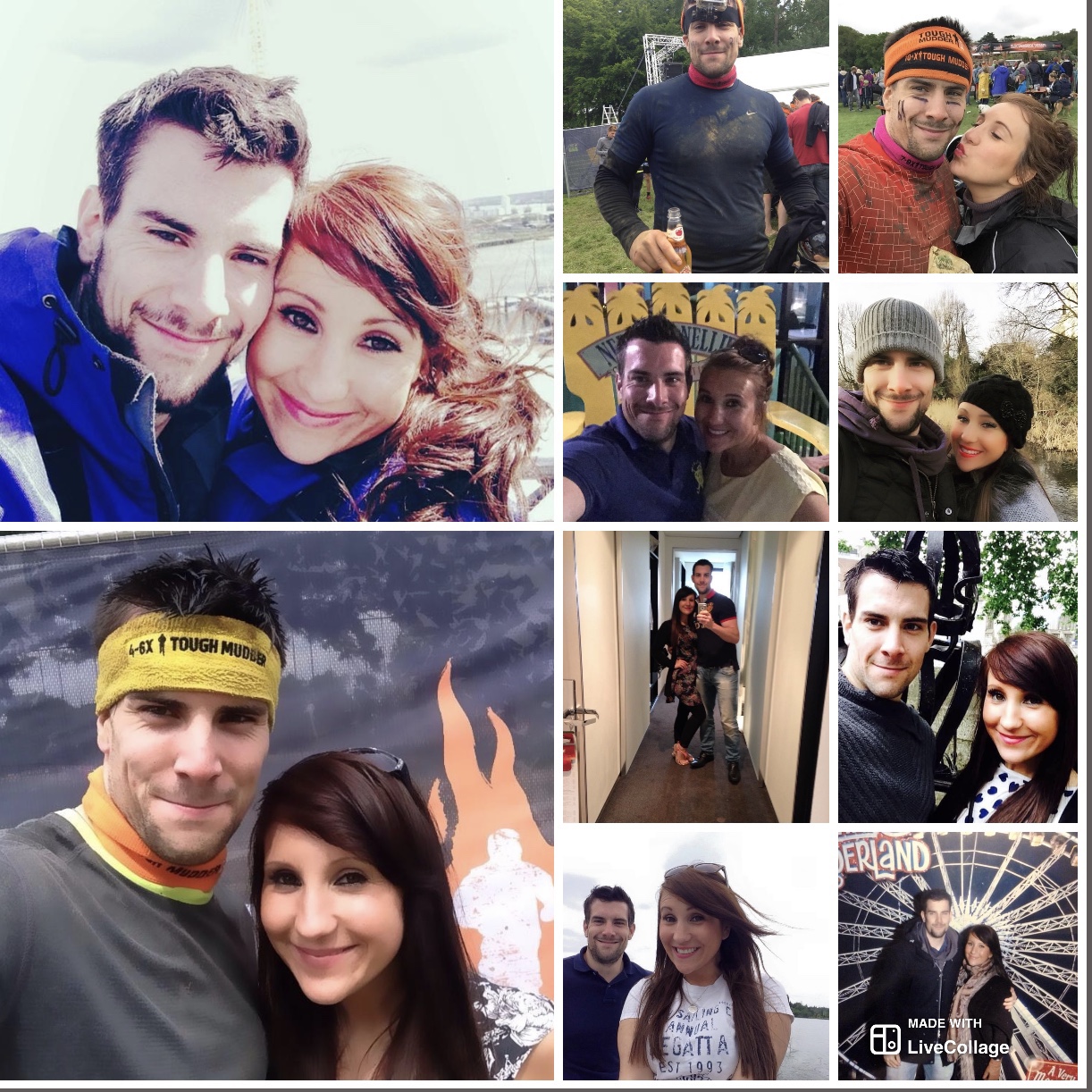 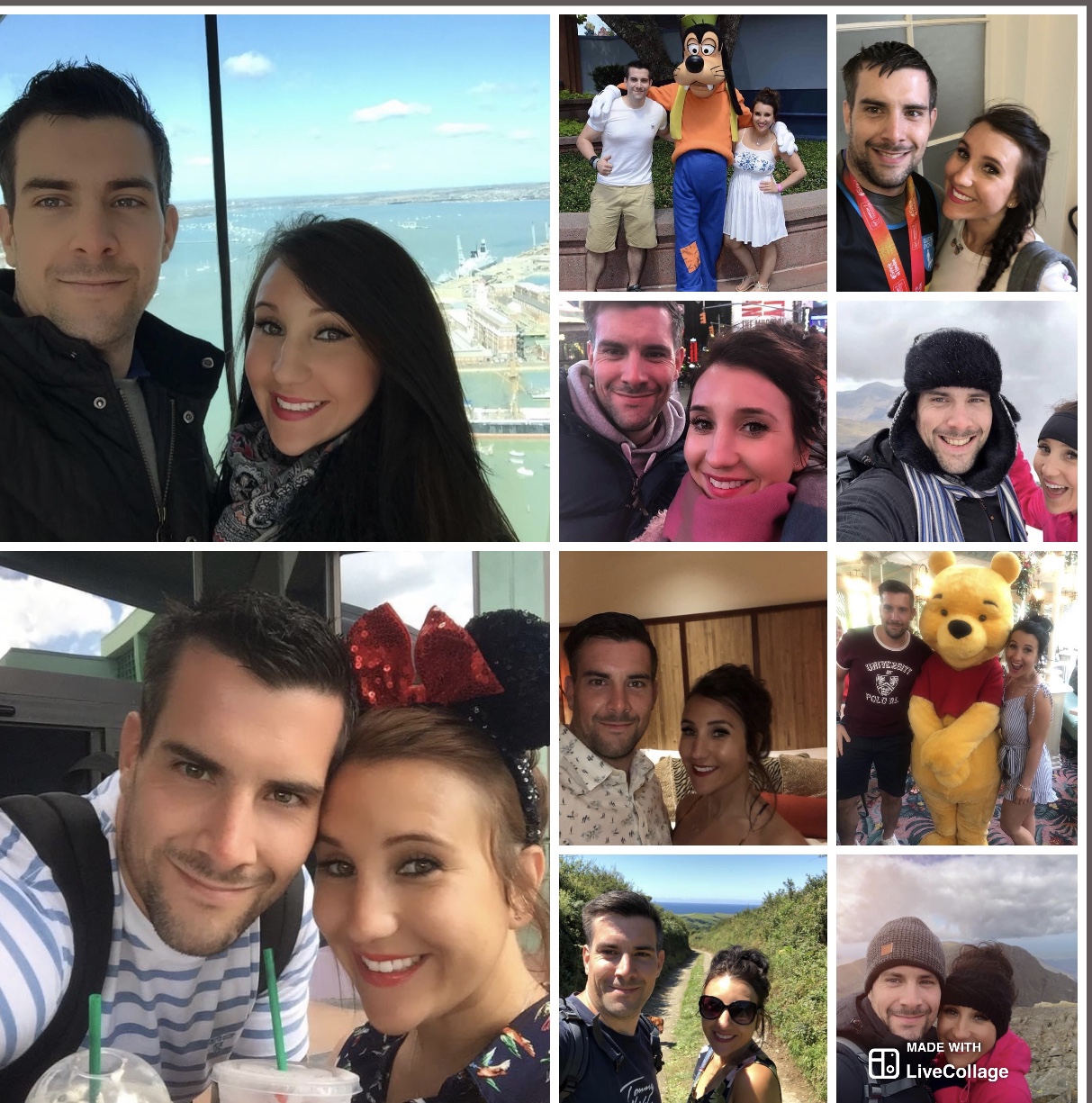 Now we have a beautiful house and the worlds most handsome, cute and adorable puppy Hunter, it may have been a slow start, but as they say good things come to those who wait.

Never rush love, never need someone to make you happy, just be you! Let it all happen naturally, it may take a while but it will be worth it in the end.

And another great line from He’s just not that into you I had to share – “And above all, if the guy you’re dating doesn’t seem to be completely into you, or you feel the need to start “figuring him out,” please consider the glorious thought that he might just not be that into you. And then free yourself to go find the one that is”