Back to Magic Kingdom! 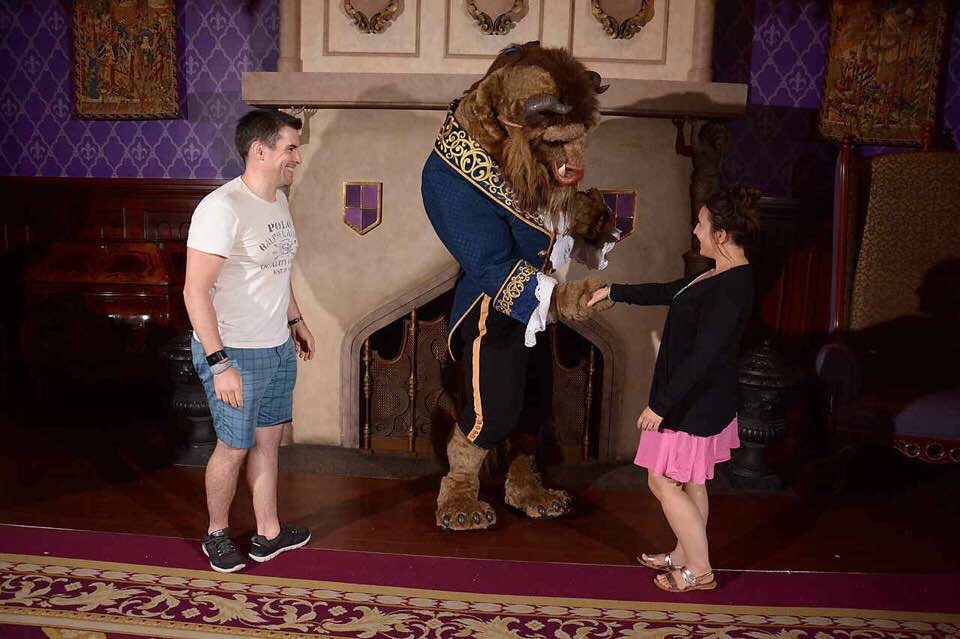 Day 7 (28/09/2017) the half way mark for Luke and I on our magical busy Disney vacation. Today we were heading right back to the Magic Kingdom, we had an early 08.00am reservation at Be our Guest, which meant….. Yep you guessed it, another insanely early start for myself and Luke!! We were up at 6am and at the gates of The Magic Kingdom by 07.30am!! But of course it was completely worth it! Getting in the park early is a massive bonus and as well as experiencing the Be Our Guest Breakfast.

Be Our Guest Breakfast

This takes place in Beasts Castle located in Fantasyland.

This is a quick service reservation and you can actually pre book your food before you even step foot off the plane! Which is exactly what Luke and I did to speed everything up a little.

So Breakfast begins with a pastry tray for the table to share, followed by one entree per person, as well as a selection of self serve beverages which are unlimited.

I had the vegetable quiche served with fresh fruit (as pictured above) and Luke had the Feast a la Gaston (which I didn’t get a picture of). Although mine was nice, having a quiche for breakfast is a little random, and I could only manage half of it. This dining experience had NO characters, and comes at a cost of $24 per person. The restaurant itself is more of a large hall (almost canteen like), although of course it’s decorated accordingly, and themed towards Beauty and the Beast.

I have to say this was possibly my least favourite dinning experience, I don’t feel that it was great value for money, and you didn’t get a lot of food, compared to some of the other breakfasts I have had. I will definitely miss out Be Our Guest in the future.

Of course getting an early breakfast reservation could only mean one thing…… WE WERE IN THE PARK BEFORE OTHER PARK GUESTS!! As soon as we were finished we headed straight for Seven Dwarfs Mine Train, and couldn’t believe our luck when we found out the ride was operating early! If you’ve been to Disney World before you will probably know that this particular ride is still very popular and comes with at least a 60 minute wait time unless you were lucky enough to have gotten a fastpass! Well we were particularly lucky and got to ride this 3 times before the park had even opened, as soon as the ride come to an end we just jumped straight back on!! That’s pretty much unheard of!!

As we had previously watched the brilliant festival of fantasy parade on the first day of our vacation (and because we had seen it 4 tines previous to that) we decided that we didn’t need to watch it again, which meant that while everyone else was watching the parade we could jump on the rides which hopefully would have a shorter queue time!!

We had a great day, and found that we managed to get lots done, including both space mountain and thunder mountain twice, people mover, carousel of progress, Haunted Mansion, Mickey’s Philharmagic, the many adventures of Winnie the Pooh, Pirates is the Caribbean, Dumbo, and The Barnstormer!! We also got to do some shopping down Main Street USA, you will definitely find me in the Pandora section, buying a few Disney Charms!!

At 19.30 Luke and I made our way back to Beasts Castle for our 19.45 dinner reservation at Be Our Guest.

The atmosphere for dinner is very different from the breakfast atmosphere which as I previously mentioned was a little canteen like, dinner however was far more extravagant.

The restaurant was very busy, and quite noisy, so if you are looking for a cosy candlelit dinner for two, you may want to try somewhere else.

Our server was lovely and friendly and was with us pretty quickly, talking us through the menu and her recommendations.

For his appetiser Luke went for the French Onion Soup

Which as you can see he really enjoyed. I actually wasn’t too hungry so skipped the appetiser and saved myself for the main meal!

For the entrees Luke went for the grilled strip steak and I opted for the sautéed shrimp and scallops. Both entrees were delicious and I was right not to have an appetiser as I was full and wanted to save room for dessert!!

So dessert…. we’ll there are many to choose from, from the dessert cart that comes round to your table. But for me it had to be THE GREY STUFF!! It really is delicious!! You MUST TRY IT!!!

Luke decided he would try the triple chocolate cupcake, very nice, but too sickly for me.

Of course the highlight of the evening is meeting the beast himself, this is the only place throughout the Magic Kingdom that you can do just that, so it’s a pretty special photo opportunity. Once you’ve eaten your server will take to where the beast is waiting and it’s there that you will meet him and have a chance to take some pictures.

I loved meeting the beast, he was such a gentleman, we only spent around 5 minutes with him, but that was plenty of time to get some great photos.

I loved dinning at Beasts castle for dinner (breakfast I wasn’t as keen on) the food was very nice, the service was great, you get to meet Beast, and also once you are done you are allowed to have a wonder round, and take some photos of the beautiful castle.

Of course Luke and I left here feeling very full indeed! But seeing as it was extra magic hours in the park from 8-10pm it seemed rude not too take advantage of the much quieter wait times for some of the rides!!

After another long 15 hours in the Magic Kingdom, I had done 25,674 steps and covered 10.14 miles, we were well and truly ready for bed! Grabbing a Starbucks to go on the way out, we made our way to the monorail and headed back to the resort, where we both fell asleep as soon as our heads touched the pillow.

I was definitely looking forward to a chilled out day at Blizzard Beach.