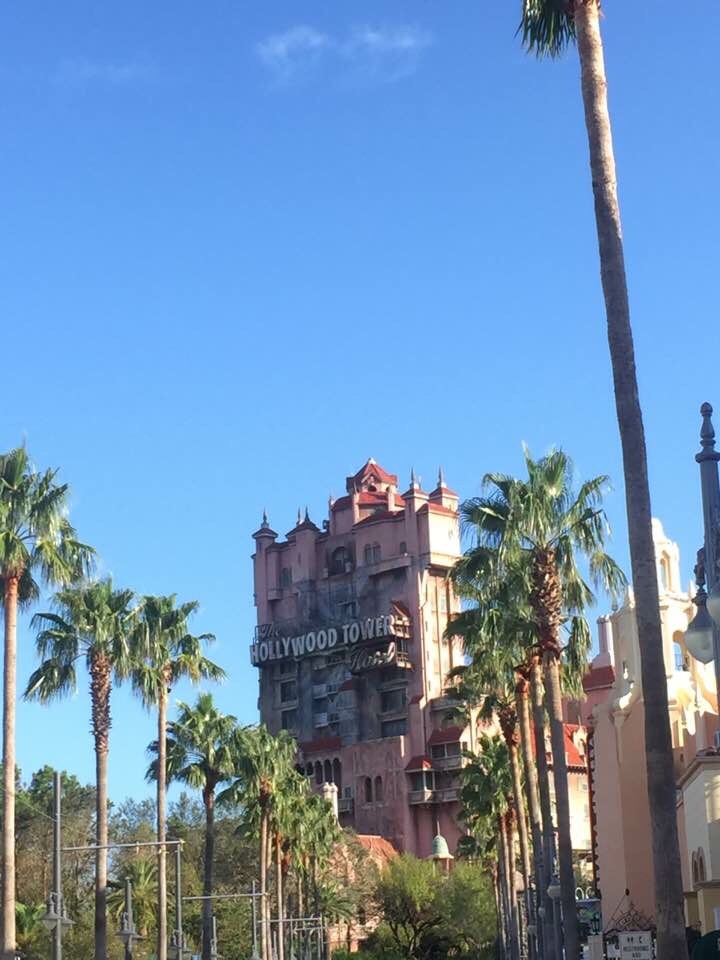 If you have read my previous blog you would know that Hollywood studios is my favourite Walt Disney World Park! I love the layout, the atmosphere (which is less Disney characters and more Hollywood fame) and of course it is home to my most favourite ride in the world Tower of Terror!

We decided to head to Hollywood studios on the Monday of our first week at Disney. It was another early starts for the Kendal/Taylor party of two, we arrived at the park in time for opening. We actually had some deliberation on what dinning experience we wanted to do here. Obviously breakfast was the strongest contender so that we could get into the park early, but when your favourite ride is Tower of Terror closely followed by Rock N’ Roller coaster and you want to get those rides done early, breakfast then becomes the less sensible option. We eventually settled on lunch at the sci-fi diner…. but more about that later.

Okay so firstly I need to point out that a big section of Hollywood studios was actually closed off for the construction of Toy Story land which is due to open summer 2018, So the park its self was a considerable amount smaller.

Hollywood studios operate a tiered system on there fast passes, which means you can pick one fast pass from option ONE and Two Fastpasses from option TWO!!! Now because part of the park was closed off when we went (Sept 2017) and really only a few major attractions were available at this park, we had to chose our options very carefully! For our first 3 FP’s we chose Rock N’ Roller, Tower of Terror and Frozen sing along! Getting at Hollywood studios for opening gave us enough time to ride both Tower of Terror and Rock N’ Roller without using a fast pass, in fact, because of the park expansion going on, this park was actually a lot less busy than previous years and we managed to do Tower of terror 4 times and Rock N Roller twice! Not bad going!!

There isn’t an awful lot to do at Hollywood studios at the moment, of course that will change in 2018 when Toy Story land opens, but even so it is still my favourite park. I love walking down Sunset Boulevard and seeing the great Hollywood hotel waiting at the end, it’s definitely a good memory maker photo pass moment!

I love the old Hollywood vibe that you get here and looking in the shops at old props and costumes, the atmosphere as I previously mentioned is a lot less Disney here, and I find it more relaxing than some of the other parks.

Luke and I had a 2pm reservation at the sci-fi diner, 2pm was ideal for us as we did the big ride before hand, leaving us a much chilled out afternoon. So eating at the here at the Sci-Fi diner really should be on your list in you can get reservation, it’s awesome! The entrance of the diner is made to look like a box office and the restaurant it’s self  is modelled after a 1950s drive in theatre. Walt Disney Imagineering designed the booths to resemble convertibles of the period, and some servers act as carhops while wearing roller skates. While eating, you get to watch a large projection screen displaying film clips from such 1950s and 1960s films as Frankenstein Meets the Space Monster, Plan 9 from Outer Space, and Attack of the 50 Foot Woman.

The food here was very typical of an American diner which completely fitted with the theming, it was really delicious, portion sizes were big and I was full by the end of my meal! We had no room for dessert but did manage the birthday cake flavoured milk shake!!! Highly recommended!

Leaving the Sci-Fi diner feeling full we obviously didn’t feel like trying our luck again on Tower of Terror or Rock N’ Roller, instead we tackled the more tame attractions here, such as Muppets 3D, Voyage of the little Mermaid and Beauty and The Beast on stage! And of course not forgetting my favourite part of the whole day……the 8pm showing of Fantasmic!!!!

I’ve said it before and I’ll say it again, Fantasmic IS Fantastic!! It’s by far my favourite show, even better than the Festival of Fantasy parade!! I really don’t want to spoil anything, so instead I’ll give my tips for watching this awesome show!