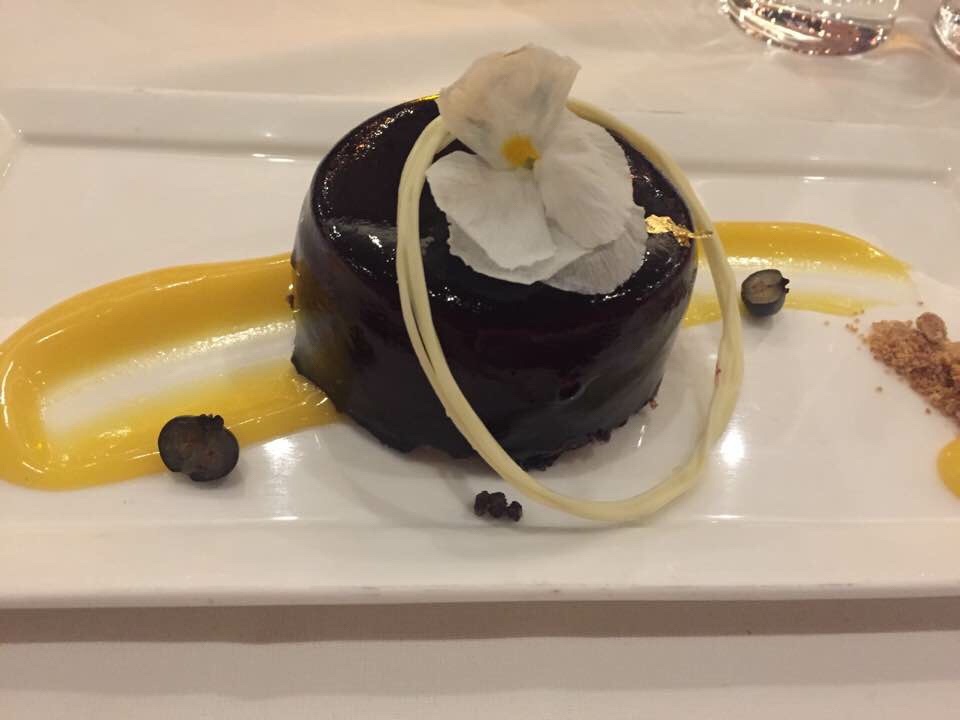 On our first Saturday evening at WDW Luke and I had dinner reservations booked at California Grill which you will find at the top of Walt Disney World’s contemporary resort. We had booked our table at 20:30 pm to coincide with Happily Ever After as the music is played into the restaurant and you can see the all the fireworks in the distance. I had heard that it is pretty spectacular so we were both pretty excited to experience this.

We arrived extra early to have a little look around the contemporary, which I can confirm is very nice! It has never appealed to me before but looking around it I would consider a possible stay there sometime.

We decided to check in around 20 minutes early for dinner, which you do so on the 2nd floor at the allocated podium. A cast member will then escort you to the 15th floor where the California grill is located. (NOTE: There is a dress code for this restaurant, smart casual and no board shorts or flip flops. I wore a dress with sandals and Luke wore his smart shorts with a shirt and his Toms)

Everything up to this point was going very well, and all cast members that we encountered were great. However once arriving at the California grill we checked in at the front desk and was immediately told that we wouldn’t be seated in time for Happily Ever After, in fact the exact words from the cast member were ”Don’t think you will be watching the fireworks from your table”. When I say we were told this immediately I do mean quite literally. It was actually the first thing the cast member said to us after we had given him our name and told him what time our table was booked for.

There was obvious disappointment from both myself and Luke as we had planned our meal to be able to experience Happily ever After. We were also both put out by the rudeness of the cast member. When we mentioned that we had specifically booked a table so we could watch the fireworks while eating he again was pretty rude and abrubt and told us it wouldn’t make any difference and that we could just watch them outside from the roof top viewing area….. Not exactly the point we were trying to make!

I was quite upset by this point, mainly due to the attitude of the cast member, there was clearly nothing we could do with regards to being seated for the fireworks so we went and stood outside on the roof top instead, and waited for a table to become available.

The view from the 15th floor is beautiful, we were lucky as we had a clear, warm night, and could see for miles.

Our table became ready just as the fireworks were about to start (how very typical).

Once we were seated inside the restaurant (on a table that was nowhere near the window, in fact it was the furthest away) we had the most exceptional service from our lovely waiter (whose name I unfortunately did not catch).

The restaurant itself is very modern, and well laid out, it’s spacious, in the sense that I didn’t feel like I was sitting on top of the couple next to me, which is always a pet hate of mine.

The food at California Grill was by far the best I had whilst staying at Disney, although was the most expensive, costing $98.00 each!

We both started off with the Lobster roll, which was delicious, and not too filling, leaving us room to enjoy the entrees.

For my main I had the fish of the day (which I cannot for the life of me remember what it was) but it tasted beautiful, and was full of flavour. Luke chose the oak fired filet of beef, which he said was cooked to perfection.

Dessert for me was the blueberry cheesecake, BEST DESSERT I HAVE EVER HAD!!! Seriously if you eat here you must try this!!!!

Luke’s dessert was the warm Valrhona chocolate cake, which although tasty, we both agreed my one was better.

Although the meal was delicious, and Luke and I had a very enjoyable evening together, the unfortunate mishap earlier on in the evening had really disappointed us and we left the restaurant as soon as we had finished eating, but there is a bar area where you can stay for drinks.

I would recommend eating here, the food and table service I couldn’t possibly fault, it is pricey but it’s good for so you are getting what you pay for. However I wouldn’t recommend booking here in the hope of watching Happily Ever After whilst dinning, I think you like me will end up feeling very disappointed if you had planned to do so.