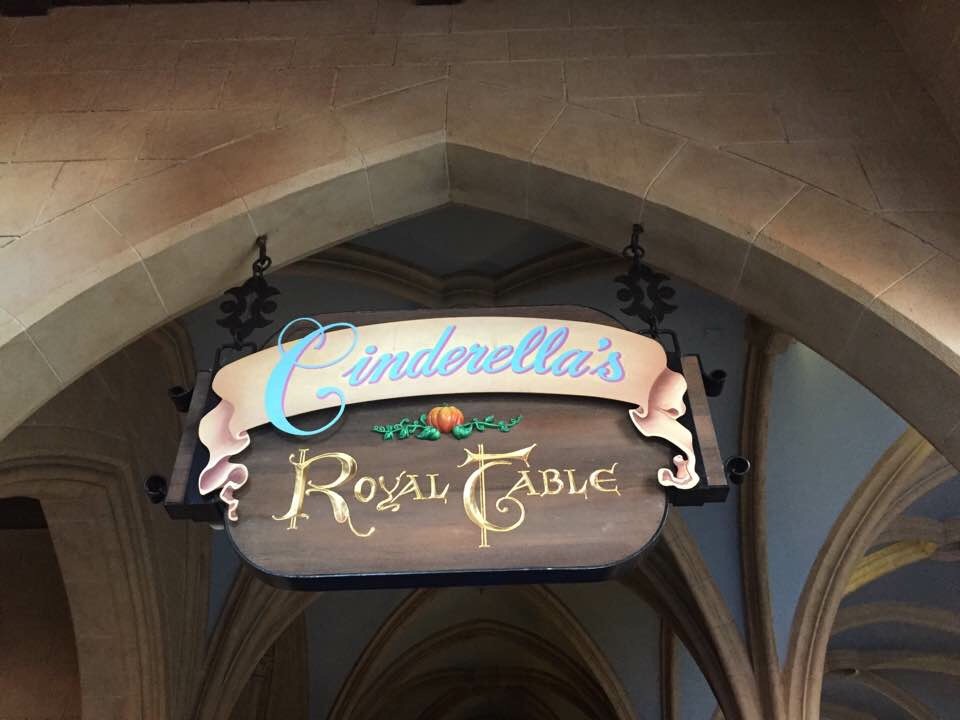 Waking up on a Thursday morning and realising you’re at WDW is an amazing feeling, even if it was 5.45am and my body clock still hadn’t fully adjusted! Today was our first full day at Walt Disney World Florida and we were spending it entirely at the Magic Kingdom. This has long been a tradition of mine that first and last days are spent here, even though it is my least favourite park, as I have mentioned before, it still most certainly can be the most magical. The reason our alarms were set so early was because we had a breakfast reservation at Cinderella’s royal table for 8am and had planned to get the resort bus to take us there.

Even with a little jet lag I was too excited to even think about being tired, and Luke was pretty much the same (after I put a cup of coffee in his hand, just to speed him up a little). We were out the door by 7am and down to the bus stop by 7.10am……. so here is where we encountered the first problem. It said the next bus would be along at 7.30 and we knew we had to get to MK go through security and through the main gates and get to the castle by 8am (with obligatory pictures on the way) having been told at resort check in it was only a 15-20 minute bus journey to MK we thought it may be doable, but decided to have one last check with reception to see if this was correct, I would just hate to have missed breakfast! Checking back at the main reception we were now being told that the bus journey would take around 45 minutes to get from the resort to the Magic Kingdom, we definitely did not have time for this so decided to drive instead.

We have since been told by management that it is in fact only a very short distance to Magic Kingdom on the bus, and does only take around 15-20 minutes!

We arrived at Magic Kingdom, parked up and got the tram to the ticket and transportation centre which is where you now go through security unlike previous years where security has been located at the main entrance to MK. Just to give you some idea of distance, once you get to the ticket and transportation centre (the TTC) you are still 1 Mile away from the Magic Kingdom itself! To access the park you go either by monorail or by the ferry-boat, both supposedly take the same amount of time, but I think the monorail is slightly quicker.

Arriving at the main gate a short while later via the monorail there was still a little queue to get in, I honestly don’t think that the Magic Kingdom is ever not busy! They let us through the main gate at 7.45 am, although that is ONLY if you have a breakfast reservation, a cast member will check your magic band or park ticket at least 3 times to make sure you do have a reservation. Once on the main gate and twice in the park.

Getting into the park at 7.45 is amazing, although I said it was busy at the main entrance once in the park and everyone spreads out Main Street USA is pretty empty, absolute perfect photo opportunity.

and a great time to get some shots done by the cast members too.

Okay so this may not be my most favourite Disney breakfast but it’s most certainly the most magical. I mean, breakfast inside Cinderella’s castle… does it get any better than that? As I previously mentioned we had an early 8am reservation, it may be early for a vacation but there is always method in our madness! Upon arrival at the castle we were greeted by a cast member who took our name and sent us through to the waiting area where we would have our obligatory photos with Cinderella (of course)

When our table was ready they made an announcement over the speaker which went “The royal Court is now ready to welcome the Royal Kendal family” what a perfect little welcome. We were seated upstairs next to the window with a great view of the Magic Kingdom. We had a lovely server who bought over a plate of pastries (what diet?) and we placed our order for a our breakfast.

Of course this is no ordinary breakfast and whilst dinning in a Royal castle it would only be right that you got to mingle with some Royal visitors too. That’s right, during your time here you will meet princess’s Aurora, Snow white, Jasmine and Ariel who will each come round to your table at different times, for a photo and to sign any autograph books too. Each princess will only visit you once, but will take a few moments out to chat with you and interact with children. Yes we might have been 2 adults there on our own but we didn’t feel awkward and actually we saw quite a few other couples there without children who like us were just there for the Disney experience (and to get into the park before opening!!)

I enjoyed the magical experience of dinning here INSIDE THE CASTLE!!

Although I wouldn’t be in a rush to book it again now I have done it, the food although very nice and tasty  wasn’t my favourite breakfast overall. You can book dinning reservations 180 days prior to your trip, Cinderella’s Royal table must be paid for IN FULL at the time of booking.

Luke and I are fast eaters….. which works really really well, we were finished with breakfast at around 8.45am which gave us 15 minutes until the park opened, time for some more photo’s before the park got busy! Once the park did open it was time to hit the rides! We managed to go on Thunder Mountain, Jungle cruise, pirates of the Caribbean, space mountain, country bear jamboree, the people mover, and carousel of progress, all before the 2pm festival of fantasy parade!

I have seen this parade 6 times now, and I love it! It’s usually on at 3pm daily, and takes place by the castle and down Main Street USA. My best advice is TO GET YOUR PARADE SPOT EARLY! And by early I mean a good 1 and a half to 2 hours early! It’s a very well-known and extremely popular parade, and the pavements of Main Street will start to fill up around 1-1.30pm. I have seen time and time again family’s and couples who come along 5 minutes before the parade is due to start and realise that the only available space is at the back, with restricted viewing! Plan this parade into your day, is my other bit of advice, 2 hours may seem a bit extreme, but trust me a lot of people do this, and you’ve come all this way, do you really want to miss out on this magical parade?

After watching the fantastic festival of fantasy parade, we had time for a few more rides, a bit of shopping and a Starbucks before heading to CRT for dinner. Again this had to be paid for at the time of booking which was done 180 days prior to our vacation. So was it worth heading back for dinner after having breakfast there. The answer is YES, for the food which was lovely (as you can see, Tomato Soup and the chefs special for me!)

And of course if you booked it at the right time you would be inside the castle whilst Happily Ever After was on. Everything else I have to say though was exactly the same including the princesses that came round to your table.

I would personally recommend dinner over breakfast on this one, the atmosphere for both our breakfast and dinner was great, service was great but food wise dinner gets my vote!!

After dinner our night was far from over, we had the Happily Ever After dessert party at 8.30pm! But I will cover that in a separate post.

This day was a crazy first one for us, spending a total of 13 hours in the Magic Kingdom, we covered 7.36 miles and did a total of 18,420 steps! Pretty impressive I think.