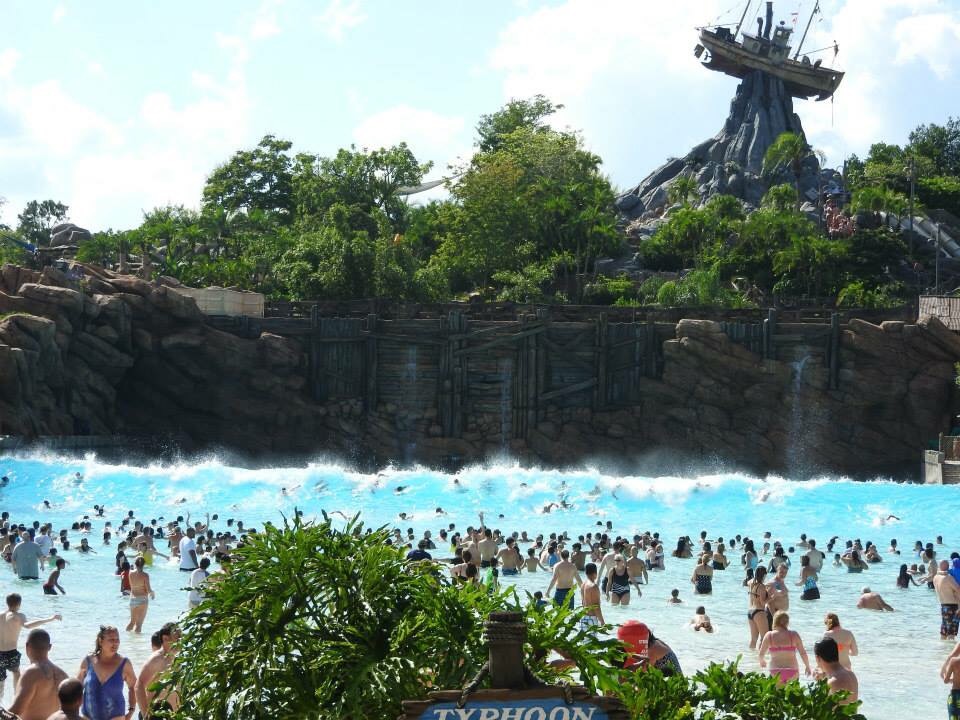 Well here we are, another Wednesday (happy hump day everyone) the week is flying by, which is good as I cannot wait for the weekend! I love weekends! Who doesn’t right!. Anyways this week as it’s Walt Disney Wednesday I’m going to be talking about Typhoon Lagoon. Now if you didn’t know typhoon Lagoon is one of two water parks at Walt Disney world, the other being Blizzard beach. I can only give my views on typhoon Lagoon as I have only done blizzard beach once and that was back in 1997, I do fully intend to add it to the itinerary for my 2017 trip, and will therefore blog all about it once I’ve been.

So here we go with the stats!….

Typhoon Lagoon was opened on June 1st, 1989, and is home to one of the world’s largest outdoor wave pools, believe me it is seriously awesome. The 56-acre water park (yeah seriously 56 acres!…. so if you thought you were in for a rest day, you were wrong!) features some of the wettest and wildest attractions at Walt Disney World. The theme of the park is the “Disney legend” of a typhoon that wreaked havoc upon a formerly pristine tropical paradise. Ships, fishing gear and surfboards are scattered about from when the storm hit. The centerpiece of the park is “Miss Tilly,” a shrimp boat impaled upon a mountain named “Mount Mayday” that erupts a 50-foot wave every half hour.

I absolutely love this park, it has a very tropical vibe with its palm trees and sandy beach area, plus all water is heated to a toasty 75-80 degrees all year-round!….yep truly a tropical paradise! Up until last year they had an actual shark reef that you could snorkel in. Unfortunately on October 3rd 2016 they shut the reefs permanently (complete sad face!), but I had so much fun swimming through these on my visits! The shark reefs were two saltwater man made reefs separated by a sunken tanker where once you got  your snorkel gear (which was provided), you got to experience snorkeling with Caribbean sea creatures, such as stingrays, bonnethead sharks, leopard sharks and colorful tropical fish. I’m pretty sad this attraction closed it made typhoon Lagoon stand out as a water park because this was something that was a very unique experience, one which me and my family always enjoyed.

Okay well there’s no point in me talking about the shark reef as it’s gone, but it is worth pointing out that typhoon lagoon is actually currently closed for refurbishment, and is due to re-open in march 2017. Sad news if your visiting before then ??
Okay so shark reef aside there are still loads of great things to do here!! So let’s talk about the attractions that typhoon Lagoon has on offer!

Humunga Kowabunga: Now this is the big one! I admit it made me a little nervous, and I wasn’t entirely sure I’d be brave enough to do it!. So basically you have three enclosed “speed slide” flumes that send you down five stories in seconds reaching speeds of 39 mph!! Intense to say the least! Now as I mentioned I was reluctant when it come to this ride, but Luke (mr 10x tough mudder) is phased by nothing, so not wanting to be left behind off I went to climb the 50 plus steps to get to the top (that’s a work out in it’s self). Now it’s even scarier once you do eventually reach the top of the ride as you can see out over the whole park!, I was thinking of backing out once I was up there and could see how high I was, but there was only one other way down which was the way I come up, and I would have to walk pass all those brave enough to do it. Nope! That wasn’t an option. As I sat my bum on the surface of the slide ready to go my boyfriend actually said and I quote ‘this was a bad idea’ erm yeah Luke it was, I told him that as soon as he suggested it! Too late now I held my breath and went (and screamed all the way down). It was over so quick, I must say I didn’t land with much dignity and had to quickly re-arrange my costume before I got up! But it was fun and worth a go, would I do it again?….NO!!.

Storm Slides: Okay so these are three body slides (Jib Jammer, Stern Burner and Rudder Buster) that send you from a height of three stories down twisting, winding channels to a splash pool at the bottom. These are a lot of fun especially if you and your partner (or whoever your with) can go at the same time, it’s fun to see who’ll reach the bottom first!

Gang Plank Falls: Is a family raft ride featuring a large four-person ring (that you have to carry to the top, cue the team work!)

Mayday Falls: Which is a tube slide flume with winding “rough rapids” so much fun!

Keelhaul Falls: Tube slide flume with a smoother ride, spiraling down through a water fall and cave.

Crush ‘n’ Gusher: This is by far my favourite ride in the whole park! It’s a Water coaster ride (very cool) where one to two people sit in rafts and are then propelled by water jets through turns and drop-offs. This attraction includes a choice of the water coaster slide “Banana Blaster”, “Coconut Crusher”, or “Pineapple Plunger”. Now honestly I’ve done all of these and I can’t pick out my favourite! So I thought I’d ask the opinion of my boyfriend Luke…. over to you Luke Kendal

Luke’s view….‘I have been down all of the slides mentioned above and out of the three my personal favourite is pineapple plunger, it seems like the faster one out of the three and the most thrilling, although of course as mentioned they are all good’ ….thanks for that Luke ?

There’s more!……
When is a water park a water park without a Continuous flowing, “lazy river” that slowly circles the entire park, passing through gentle waterfalls, lush rainforests, mist screens, and Mount Mayday itself. You can float on the rings provided, absolute bliss.

There is also a beautiful Sandy White Beach: area with lounge chairs as well as a wading pool area adjacent to Crush ‘n’ Gusher.

I give a big thumbs up to all the thrill ride attractions here!!?? but what about for the younger ones?….. well of course being Disney they cater for all ages!

For the younger ones

Bay Slides: Beginner slide designed to send toddlers down gentle slopes that end in a secluded corner for the “Surf Pool”.
Ketchakiddee Creek: a play area for young children featuring small slides and fountains. There are water features that spray everywhere including a tugboat and a mixture of whales and seals throughout the play area. A small sandy beach is also provided.

I didnt check out the kids area in too much detail but it certainly looked fun.

Okay so now here’s some interesting things you should know before you visit.

There are showers and dressing rooms which include lockers, lockers are charged at $15 per day.

Life jackets are provided for free, but you must leave a driver’s license or credit card as deposit.

You are not allowed to take on your own flotation devices into the park (so you know the giant dolphin or alligator you picked up at the local Walmart?…. well it needs to stay at home)

Towel rentals are $2 per person, although I do believe if you have a valid magic band (and are staying on Disney property)then you will receive towels for free. That information will need checking as I haven’t as yet stated on Disney property.

Now at typhoon Lagoon you can actually rent spaces, too, so you have

You cannot leave this park without getting a snow cone! So delicious!! I always get one right before I’m leaving, and it’s ALWAYS grape flavour! My favourite! I always make the mistake of buying one for me and one the Luke but actually it’s big enough to share so one is plenty…. but hey you’re on holiday after all!

Well this brings me to the end of my typhoon Lagoon blog, I hope you found it helpful and informative, this is probably the park I took the least amount of pictures in, so had to hunt around my albums to see what I could find. Please once again like, comment and give me a shout with any questions or tips you may have that I can use on my 2017 holiday. Please also head over and check out my new blog page if you haven’t done so all ready.

I’ll be back next Wednesday with a brand new Disney blog all about the Magic kingdom, I’ll be going into more depth about planning, inside tips and everything else you need to know!.

Until next time that’s me